The Energy of Lakeside 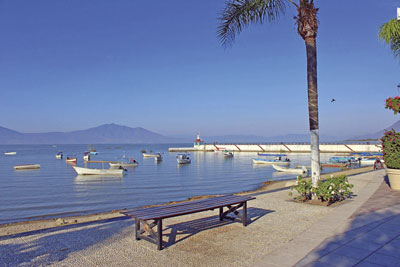 It has become quite clear why I was drawn to the Lake Chapala area of Jalisco, MX. One cannot deny that the energetic vibrational frequency pulsating throughout Lakeside is palpable. Indian yogi and guru Paramahansa Yogananda (1893-1952) introduced millions of westerners to the teachings of meditation and Kriya Yoga through his Self-Realization movement and his book, Autobiography of a Yogi (1946). He spent time in Lake Chapala in 1929 and said that one day it would be the site of a great spiritual awakening. I wake up every morning with a smile on my face, and joy in my heart. The logical reason for that is because I’m retired and living comfortably (on my measly pension) on the beautiful North Shore of the largest lake in the country. Although that’s enough to put a smile on my face, it’s the joy in my heart that is mystical and downright unexplainable. A friend of my mine who is a retired chemist lives here, and once told me of a chemical compound known to elicit feelings of wellbeing, that rises off the lake in the late evening, in a mist. He said that the mist cannot be seen in the air, yet we breathe in the airborne substance overnight, as most windows are open due to the lovely weather. He was quite serious in his testament, but I didn’t need much convincing as it made total sense to me.

A 45-minute drive outside the Lakeside area on the property of Don Manuel Dominguez sits a vortex. A vortex, besides being what forms when something is stirred, is a special, sacred and energetic spot on Earth. It is where energy is either entering into the Earth or projecting out of the Earth’s plane. Vortexes (or vortices) are found at sacred sites throughout the world. They are known as a mystical phenomenon like the Great Pyramids in Egypt. In 1998, Shaman Don Jose Sebastian visiting the property, told Don Manuel that there was a focused cosmic energy (vortex) on his property. Years later that special spot is visited from people all over the world. I have visited Foco Tonal (the name of the property) twice now. Each time was a moving experience. The first time I went with a small group of women. We were told prior to our visit to wear all white, if possible. When we first arrived, I entered their gift shop which was beautifully stocked with charms, crystals, ordainments, oils and spiritual paraphernalia for every practice imaginable. I bought an amethyst about the size a baseball; it’s my birthstone and favorite crystal. The time spent in the vortex is limited to 15-minutes per group. How you split that time up is up to the group to decide. As it was on that day, we divided into 2 groups, so we all had 5 minutes individually inside the vortex. I walked in barefoot and laid down my amethyst and a pen. I spoke my name out and the reverberation that transpired within that spot was an auditory mystical, magical, energetic and spiritual experience. Open and receptive, I connected with the All That Is, and spoke into the Universe my heart’s desire during my 5 minutes. That experience took place around the end of January 2018. I have since written 3 books, created a Brand, a website and have become a blogger.

The mystical mountains surrounding Lake Chapala is another element that energetically supplies the area. I’m a hiker, I have hiked twice a week for the past 2 and 1/2 years now. During my hikes, mostly to a beautiful flowing waterfall. I have come across different and interesting religious shrines, edifices, ceremonial grounds, and such, on trails throughout the mountains. I watched the foliage turn from lush green to brittle brown, learned about various insects, and have taken in deep cleansing breathes surrounded by a multitude of giving trees. One of the most challenging hikes I ever completed was to Shaman’s Rock. Another difficult hike was to the Ceremonial Grounds. That sacred land in the mountains is where an indigenous tribe carries out a rite of passage ceremony where the young men have the skin on their chest split open. These ceremonies are not open to the public, but local hikers are invited to observe and strictly adhere to guidelines for observation. The hundred plus year old trails are rocky, steep and demanding, for they’re actually cattle trails. It’s not uncommon to cross paths with cows and horses when hiking.

If the Lake, Vortex, and Mountains were not enough for high frequencies to resonate here, there’s more. There’s the rich mystical history of the Aztecs, Mayans, Olmecs, Tolmecs, and Zapotecs tribes. There are areas close to the Lakeside region that have ancient Pyramids, which add yet another depth of mysticism to the land. Two Spiritual communities are thriving here as well. One is called Namaste Lake Chapala. It is a Course in Miracles community of Tiny Houses founded and developed by James Twyman. The other is called Villa del Angel Ajijic. It is a hotel setting with rooms for rent and year-round tenants. It has a holistically oriented campus undertone where retreats, classes, yoga and meditation take place to help facilitate physical, emotional, and spiritual development. Along with the rich history of the land and virtual and physical Spiritual communities, are the churches and meditation meetups. There is a smorgasbord of choice for anyone’s spiritual appetite.

It is without question, that the energy that resonates in the Lakeside area is extremely high. The area is filled with creators of all kinds; painters, writers, poets, actors/tress, dancers, musicians, artists, performers, and influencers. One feels Lakeside; it’s a high vibe atmosphere, yet a laid back and easy about most things’ way of living. The only word that comes to mind when I endeavor to explain this little slice of heaven I’ve found here is…grateful.