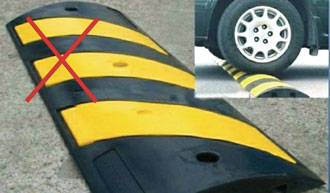 While dining in Paris last year, I had the great good fortune to run into Sr. Tope, originally of Chapala, Mexico. He was sitting alone in Au Pied de Cochon, a restaurant famous for its pig knuckles. Elegantly dressed, mustachioed and reading a past issue of El Ojo del Lago, he welcomed my arrival at a table adjacent to his.  Although a very wealthy gentleman, he seemed down to earth, rather shy and noticeably rotund. When he found out I was living in Ajijic, he lit up and asked about his former pueblo. I assured him that everything was fine Lakeside.

Javier Tope Moreno made his fortune when he was able to show that his invention, the eponymous speed bump we all love to hate, was much more effective and less expensive than semáforos or policemen packing radar guns. The Sleeping Policemen, Sr. Tope affectionately called them.  The Federal government saw a cost-saving device and signed a contract allowing my dinner partner 8 pesos for the standard tope and ten pesos each for the insidious little ones that can launch your vehicle airborne.  As they became more and more ubiquitous throughout Mexico, Sr. Tope became wealthier and wealthier. He was now a permanent resident of Paris, France.

I asked Sr. Tope if he missed Chapala, lakeside pueblo of his youth. “Oh, yes,” he assured me.  “Look what I’m reading.  I’m very happy that the folks at El Ojo del Lago decided to print a Spanish edition.”

As we were savoring a smooth Bordeaux, the famous pig knuckles arrived, and we set to work with the little forks they provide for digging into the tender joints. After our exquisite meal, I thought to ask if there was any particular event that shaped his life back in Mexico, something that perhaps accounted for his success and happiness.  “Ah sí,” he replied and launched into a remarkable tale.

When Javier Tope Moreno was a young, ambitious man, he decided to leave his pueblo and journey to a town with a better economy and better prospects.  His parents gave him their blessing, and he set out on a long trek.  Midday, he came to rest near a little farm community that featured a cemetery along the main road.  Young Tope soon found himself walking among the headstones interested to read the inscribed names and dates. He soon realized that he was in a children’s cemetery where none of the children exceeded ten years of age.  For example, Juan Carlos Zamora lived eight years, six months, two weeks and three days.   Alejandro Pacopancho, lived 5 years, 8 months and 3 weeks.  What terrible thing happened here, he thought?  What evil befell this community so that its citizens felt obliged to build a children’s cemetery?

Suddenly, an elderly native appeared and, reading the young man’s mind, assured him that there was no curse to worry about.  “Sereno Moreno.  Here we have an old custom.  When a youth attains his 15th birthday, his parents gift him a notebook, which he carries from that day to his death.  Whenever he experiences some intense joy, some exhilarating moment, some blessed event, he writes it down on the left side of the notebook.  On the right side he notes how long the intense enjoyment lasted.  His first kiss, for example, his wedding day, the birth of his first child, the marriages of his friends… Then, when the person dies, we take his notebook and add up all the times of his intense enjoyment and inscribe them on his tombstone.  We think that this is a unique and better way to tell the true time of life.”

“That experience influenced the rest of my life,” said Sr. Tope and ordered another chocolate éclair.

“Intense enjoyment has been my goal ever since.  Don’t you have a similar saying, something about taking your breath away?”

“Yes, I think we do: ‘Life is not measured by the number of breaths we take, but by the moments that take our breaths away.’”

When I told Herlinda, my Spanish teacher back in Ajijic, about my meeting with Sr. Tope, she laughed and said that that was a famous, old story written by Jorge Bucay, an Argentine writer in the last century.  To my chagrin, I suddenly realized that Tope had once again stopped me in my tracks. 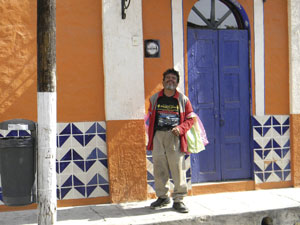 Señor Bag Man
Señor Bag Man     His long shadow has an attitude all its own, the audacity that comes from knowing the path, no tale to drag along, 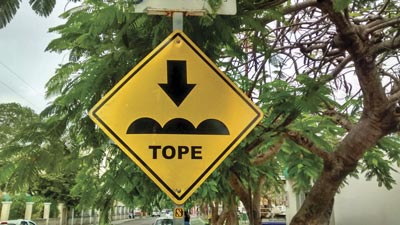 Señor Tope
Señor Tope By Mark Sconce   While dining in Paris last year, I had the great good fortune to run into Sr. Tope, originally of Chapala, Mexico. He