AND THEN CAME THE CONQUISTADORES 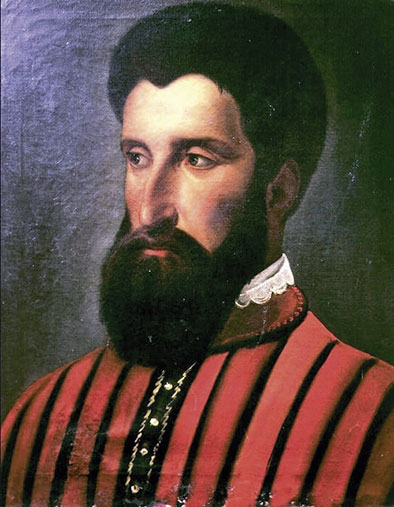 Following Cristóbal Colón’s voyage of discovery in 1492, Spanish adventurers began explorations of the New World. An early expedition to the Caribbean coast of what is today Colombia bore two map makers, Juan de la Cosa and Amerigo Vespucci. These first explorations drew little interest in locating cities on the South American mainland, but by 1528 Rodrigo de Bastidas established a permanent settlement on a deep protected bay and named it Santa Marta. Pedro de Herédia established a second settlement in 1533 on the smoking ruins of an indigenous settlement known as Calamari that at a later date acquired the more famous identity of Cartagena de las Indias. On April 6, 1536 the first grasping hand of conquest extended toward the land of the Muisca. Gonzalo Jiménez de Quesada with 500 soldiers advanced southward from Santa Marta in search of the villages of the salt makers, following the course of the great Río Magdalena and then climbing the slopes of the Cordillera Oriental toward the Sabana Grande occupied by modern-day Bogotá.

To the south on his third attempt in the conquest of Perú, Francisco Pizarro at the field of Cajamarca defeated Atahualpa and ransomed the Inca emperor for a fabulous treasure of gold and silver. Then Pizarro murdered his captive. From Cajamarca Pizarro set off to Cuzco to extend his conquests. In the meantime he dispatched Diego de Almagro and Sebastián Belalcázar to reduce and capture the northern-most Inca redoubt located on the site of modern-day Quito, Ecuador. From Quito, Belalcázar, accompanied by 100 Spanish soldiers, marched northward and entered the lands of the Chipcha culture that had remained independent of the Inca Empire. In October of 1535 he captured the indigenous settlement of Popayán, (that to this day remains one of the most charming colonial cities in Colombia). Before arriving at Popayán, Belalcázar had established a European settlement at present-day Pasto, capital of the Colombian state of Nariño. Later he founded Santiago de Cali, today Colombia’s third largest city.  Belalcázar became known as the founder of cities. He was responsible several more that have survived until this day.

In 1537 persistent rumors of a native prince who covered himself in gold drew Belalcázar from Popayán to the highlands occupied by the Muisca. To his dismay he found that Quesada had arrived before him and defeated the Muisca princes, taking possession of the gold and emeralds that the Indians regarded as having only ceremonial value. Soon, deceptive tales of a golden city drew Quesada and Belalcázar off to the north where they may have crossed paths with another unexpected adventurer.

And along came the Germans

In 1516 Charles I, became the first king of consolidated Spain, uniting Castile and Aragon. In 1519 as heir of the Austrian Hapsburg family, he became Charles V, Holy Roman Emperor. He was quickly embroiled in dynastic wars in France and Italy and at the same time became an uncompromising foe of the incipient Protestant Reformation. His European adventures plunged him deeply into debt. Among his largest creditors was the Bavarian banking family of Anton and Bartolomeus Welser. In 1528 the Welsers obtained agreement from Charles to colonize and exploit the lands identified as Nueva Granada, roughly the territory occupied by Venezuela, today. The first German expedition arrived on Lake Maracaibo in 1529. They encountered an indigenous population living in huts built on pilings over the waters of the lake, (a village on the water, Sinamaica, still persists today). They called their first settlement Klein Venedig, or Little Venice, ergo Venez - uela. The Germans’ immediate objective was not to establish a colony, but to seek riches that would compensate them for their investment in the Holy Roman Emperor.  In 1531 the first of the adventurers, Ambrosius Alfinger, mounted an expedition into the mountains dividing Venezuela from modern Colombia, the Seranía de Perijá. It lasted two-and-half years. There is no evidence that they found any wealth, but they did meet with ferocious resistance that cost Alfinger his life to a poisoned arrow. (Alfinger’s time in Venezuela must not have been entirely fruitless: the surname Alfinger is very common to this day among Venezuelans residing in the environs of Lake Maracaibo). 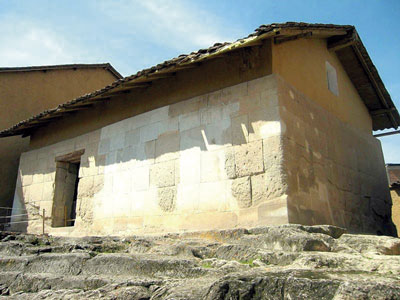 Atahualpa’s ransom included filling this room once with gold and twice with silver.

A second German expedition was mounted in 1535, driven this time by rumors of El Dorado brought back by a survivor of the first campaign, Nikolaus Federman. This foray also led to disaster when they marched into the lands of the Chibcha. Of the force of 450 soldiers and 1,500 friendly Indians that had set forth, only 80 sick and ragged Europeans returned after more than four years in futile search for wealth. The force had divided early in the venture and one part was never heard from again. It is not recorded whether German and Spaniard actually met in the lands of the Chibcha, but such an event might account for the disappearance of the missing party of Germans. A legend persists to the present of a massacre in the mountains of the Perijá by Indians of a party of conquistadores returning to Maracaibo from the west.

The Conquest of Perú

The first attempt at exploration of the interior of the South American continent was undertaken in 1522 by Pascual de Andagoya.  He landed at a point near where the border of Ecuador and Colombia lies today. Nearby friendly indigenous people told him of a city of gold called Virú that stood on the banks of a river known as Pirú, (hence the origin of the name Perú.) Andagoya fell ill and cut short his explorations, returning to Panamá.

Francisco Pizarro arrived in the New World in 1502. He accompanied Vasco de Balboa on his march across the Panamanian isthmus in 1524 to be among the first Europeans to see the Pacific Ocean. In Panamá, Pizarro formed a partnership with a soldier, Diego de Almagro, to explore and conquer Virú and divide it’s wealth between them. Pizarro and his confederates mounted two expeditions to the land of El Dorado in 1524 and 1526 both of which met with forceful resistance. It served to reinforce their certainty that Virú offered opportunity for wealth and power. As Pizarro and Almagro began preparations for a third adventure, the governor of Panamá refused them permission to initiate the attempt. Pizarro sailed to Spain and in 1528 obtained permission for the venture directly from King of Spain, Carlos I in a document known as the Capitulación de Toledo.

In the meantime a young adventurer, Francisco de Orellana, Pizarro’s cousin and like Pizarro, native of Trujillo in Spanish Extremadura, arrived in Panamá at the tender age of seventeen. When Pizarro returned from Spain in 1530, Orellana joined his cousin’s expedition. Pizarro’s force consisted of 108 infantry and 60 horsemen when he marched to Cajamarca. He met with Atahualpa’s army of many thousands and defeated the Inca emperor by ruse. Approaching with gifts, the Spaniards slew Atahualpa’s personal guards and made the Inca emperor prisoner.

Pizarro’s brothers Gonzalo and Hernando and another prominent Spaniard, Hernando de Soto, who a few years later explored the Southern United States from Florida to Arkansas, also participated in the venture. After the ransoming and execution of Atahualpa, the Spanish forces marched on the Inca capital at Cuzco and capturing the city, installed seventeen year old Manco Inca as a puppet emperor, (a tactic perhaps learned from Hernán Cortéz, who slew Moctezuma and installed his son Cuautemóc). Pizarro returned to the coast and founded Lima, making that city the capital of his conquest.

Almagro, Pizarro’s partner in the conquest, marched southward in an abortive expedition to conquer present-day Chile. During Almagro’s absence Pizarro consolidated his power in Perú and when his partner returned, they fell out over the division of the spoils: a dispute over Pizarro’s claim of the rights to Cuzco. In the ensuing civil war, Pizarro prevailed at the battle of Las Salinas in 1638 and executed Almagro. However, he failed to execute Almagro’s son Diego El Mozo, who later in 1541 invaded Pizarro’s palace in Lima with the aid of supporters and assassinated him. El Mozo was installed by his confederates as governor of Perú, but shortly thereafter was defeated in the desperate battle of Chupas in September of 1542. He escaped to Cuzco, but was arrested, immediately condemned to death, and executed in the great square of the city.

NOTE: It is difficult to place the Spanish conquest of the Americas in the context of Twenty-first century values. History tells us the Conquistadores committed terrible acts of cruelty, or in the best possible construct, acted with extreme indifference to human suffering. On the other hand the human experience in Europe in the Fifteenth and Sixteenth Centuries offered no guidance for alternative conduct. The conquistadores that arrived in the Americas had left behind a Spain that had fought with terrible ferociousness to drive the Moors from the Iberian Peninsula and had completed the conquest of Andalucía virtually on the eve of Cristóbal Colón’s discovery of America.

In Europe of the era leaders of modest beginnings acquired wealth and noble stature as rewards for military success and their companies thrived on loot taken in their campaigns: perhaps the first inklings of Western Civilization’s concepts of socio-economic upward mobility.

It would be difficult to expect that these warriors would have altered their conduct in their campaigns in the Americas. They certainly faced the same threats of dismemberment, pain, and torture that they handed out. In that context a twenty-first century Westerner might be able to sense the extraordinary courage displayed by these early explorers and warriors, without excusing their lack of humanity.

And what of the wonderment? They had never seen monumental cities as Teotihuacan in Mexico or the marvels of Cuzco or the Inca fortress of Sacsayhüaman, constructed of massive cut stones weighing as much as 300 tons. They gave credence to cities of gold and risked all to discover El Dorado. They had never imagined a river of the magnitude of the Amazon or encountered the density and extension of that river’s surrounding forests. How could they resist the temptations; the eye-popping wealth that Atahualpa brought to pay the price of his ransom or the gold and emeralds they found simply strewn over the ground around Lake Guatavita?

What of the fabulous animals they discovered: llamas, serpents, tapirs, leopards, birds? What of the foods they tasted for the first time: bananas, tomatoes, cacao, maize, papayas, mangos, avocados, guanabanas, chirimoyas?

Whatever their shortcomings, these adventurers were men of courage. They encountered wonders at every turn and faced dangers far beyond anything for which they had prepared themselves. They were certainly no lesser men in their time than Daniel Boone, Meriwether Lewis and William Clark, or John Glenn and Neil Armstrong in their own. 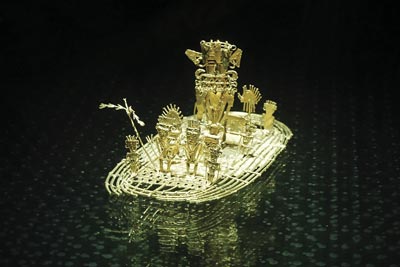 El Dorado
El Dorado The Legend The Muisca Raft By Robert Drynan   Discovered by peasants in 1856, it is the center piece of the Gold Museum in Bogotá,