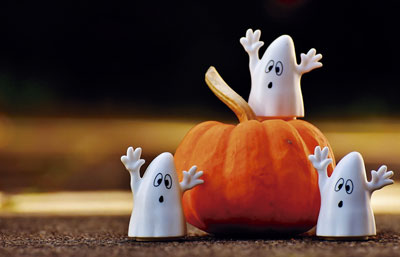 It was late at night just before Halloween. 1968. Maybe ‘69. Several of us were crammed into a small, third-floor bedroom in our college fraternity house talking. The conversation meandered, appropriately, to scary events in our lives. Power outages. Near-miss car accidents. Unexplained phenomena. Ghost stories.

“My aunt,” Jack said, “periodically wakes up to see her mother standing in the darkened bedroom. My grandmother has been dead for years.”

“Just the one. And hears it. It groans my aunt’s name. ‘Ida. Ida,’ it pleads in a painful, haunting rasp.”

“Has your aunt demonstrated that she’s crazy in any other ways?” one of us asked.

We all laughed. “Pee break,” Jack announced and dashed out of the room.

The stories continued. One fraternity brother related witnessing a football player from his high school breaking his leg in a game. “I could see the protruding bone,” he said. “I still see it.” Another brother told the tale of unexpectedly coming upon a cluster of bats during a late dusk walk down a shadowy alley. A third described a haunted house a local radio station created every Halloween in his home town.

A startling noise against the window interrupted the conversation. Whether seated or standing, we jumped in unison.

Another bang against the window triggered another group heart palpitation

We stared at the window and realized we could hear a muffled voice. Calling. Groaning. Aching.

I leapt to the window and looked down into the unlit passageway between our place and the neighboring boarding house.

There was Jack, covered in a white sheet, a flashlight glowing from under the linen. Jack was gyrating like a disjointed ghost. “Ida! Ida!” he howled.

To this day, I don’t know if Ida really existed or, if she did, had she really seen ghosts, or if Jack had masterfully set-up all of us. But it is a Halloween tale that has humorously haunted me for decades.