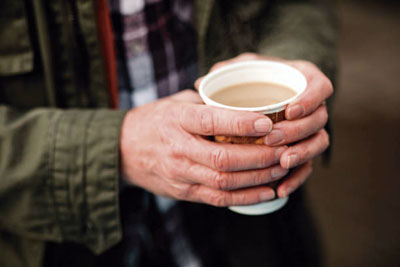 On a narrow side street in downtown Manhattan, the lights are still on in Malik’s Automat Café. The surrounding offices are dark and their elevators sit at ground level, empty and quiet. The security guard who lounges behind a desk in the cavernous lobby next door to Malik’s, whose face reflects a small TV screen, pays no attention to the soldier in a camouflage print jacket and pants making his slow journey up the sidewalk.

The soldier halts at the entrance to the automat.  He places one hand on each side of the doorway, steadying himself, as he faces the vending machines at the back of the café.

Malik is wiping down tables. The soldier’s gaze seems to Malik to be as usual—a continual alertness behind eyes that cannot quite identify their surroundings. As if the soldier had not been to the café many times before. Dinner is waiting for Malik at home, a meal he will share with his wife and children. He reminds himself that he should be closing. But he knows he will keep the café open for his last few customers.

The soldier heads toward the row of glistening vending machines. Each offers a single serving behind a glass window just wide enough for the customer to reach in and retrieve the selection. The soldier stands completely still, as in wonder, before the machines that beckon him to insert coins or slide a dollar into the illuminated slot.

He surveys the offerings of wrapped sandwiches, cups of soup, and slices of Middle Eastern style meatloaf. Searching for the window that promises a slice of pie. Pumpkin has been the recent offering, easily detected because it has no top layer of crust. It shines in comparison with the crisscrossed lattice of the all-season apple pie.

The soldier’s hand trembles as he pulls a dollar bill from his jacket pocket and unfolds it. The blinking green light, just beyond his direct vision, grabs his attention. He takes a quick step back, as if he might turn on his heel and exit.

Malik comes over and puts his hand on the soldier’s shoulder. “Good evening, Paul. Are you having the pie?”

Paul. The word resonates in the soldier’s ear. It refers to something about him, but he isn’t sure what. Paul is a word Malik and a few others repeat when they stand near him.

Sometimes they touch his arm or his shoulder, as Malik has just done. Other times they extend their hand and, realizing he doesn’t know what is expected of him, grasp his. He feels warmth.

Paul aims his hand tentatively toward the slot that beckons. Malik steadies it with his own, the dollar bill is sucked in, and Malik says quietly, “B14”. The soldier pushes the button. The small window swings open.

Malik pours the soldier a paper cup of coffee, turning his head to see if Paul looks steady enough to carry the hot liquid. The soldier is already moving toward the table nearest the door. Malik follows him and sets down the coffee.

This is an automat. Malik is not supposed to be assisting the customers. There are no tips to be earned, and his dinner is waiting at home. The old ways have stayed with him. Service has been deeply ingrained, and Malik honors it.

The soldier sits down. He stares into the darkness beyond the front door and seems to have forgotten the food and drink in front of him. A voice comes from the corner of the Café: “Do you like pie?”

Paul jumps up and knocks the table over. He crouches automatically as he orients himself toward the voice of the old woman in the shadows, folded blankets made of coarse wool stacked all around her. The one who is always in the same corner stall of the market. Familiar odors of damp wool and sawdust reach him. He knows she is watching his every movement.

Malik stands behind Paul and decides not to intrude for the moment.

The soldier stands still and tries to focus on the voice that keeps mentioning pi. A word in a language unfamiliar to him. It might mean information. The old woman could be offering him the description of a certain car parked around the corner. For a price.

“I love to bake pies. I make the crust myself.”

The soldier stands, listening. The smell of damp wool fades. He turns to Malik and back again, realizing slowly that this old woman is not the vendor in the marketplace. Paul looks down at the spilled coffee collecting around his shoes and the fragments of pie that protrude from the upsidedown paper plate on the floor. The table lying on its side. He puts his hands over his eyes and cries softly.

There is no other sound in the café.

The woman gestures to Malik to stay where he is. She gets up and gathers her coat and her shoulder bag in her left hand. She walks to the soldier and puts her right arm through his left, gently pulling his hand from his face.

“Why don’t you come with me and I will make you a pie. I have no one else to cook for.”

She guides the soldier out the door of the café and heads toward her apartment. Malik waits until they leave to close the door, and to turn around the hand-lettered sign that says:

Come, whoever you are.

Ours is not a caravan of despair.[1]