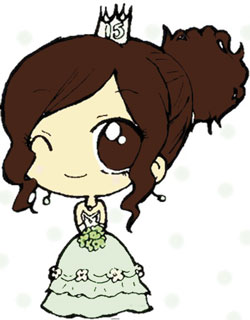 If you ever get an invitation to a quinceañera in Mexico, don’t miss it. It's the special Spanish ceremony celebrating the transition from a girl to a young woman.

The quinceañerafor the daughter of my immigration agent Rosella was another insight into Mexican customs for me, beyond all expectations I may have had—a black and white event with hot fuchsia accents, a combination of Spanish traditions with contemporary choreographed dance routines.

I'd seen quinceañera parties in Mexican restaurants while dining with friends—a dozen giggling girls in party dresses and bashful boys in suits clustered together in a private room to one side, sharing a rite of passage centuries old, marking the change of one among them from childhood to young womanhood. Nicole’s event was my first time as an insider. As a special guest, invited to speak as part of the toast and to dance with Nicole in the traditional family waltz, I felt very honored. I wouldn't have missed it for anything.

The afternoon began with a photo shoot in the gardens of a galeria on the main boulevard in Rosarito Beach. Three days earlier, Rosella had reminded me to be on time for the four o'clock picture taking so we wouldn't be late for the six o'clock mass at the church twenty blocks away. Four o'clock came and went without anybody else in sight. So did four-fifteen and four-thirty.

I paced back and forth on the sidewalk, looking for Rosella and Nicole, wondering if I had the right place. Becoming more and more nervous, I checked with the manager of the galeria about the photo session. She was unaware of any such event that day but confirmed it was the only place in town with that name.

Just before five, a car with four guys in white shirts pulled up. They sat in their car, visiting and talking on cell phones until a black limousine pulled up. The limo door opened to reveal Nicole’s billowing skirt. As she bent forward to get out—a princess in hot pink—a sparkling tiara and matching earrings, her face glowing under coiffed hair as a necklace, bare shoulders, and strapless dress called attention to her emerging womanhood. The four guys in white shirts jumped out of their car and began memorializing the moment with video and still cameras.

Her six chambelanes(attendants) spilled from the limo behind her. All about the same age as Nicole, except for her seven-year-old brother José Carlos, they wore black tuxedos, white shirts, black ties, and hot pink vests to match Nicole’s dress. She blew a little beso to me as theywalked to the galeria gardens. Rosella, wearing a black satin skirt and white bustier pulled tight by black laces down the back, arrived shortly with other family members. She herded all of us toward the interior gardens of the galeria for a family picture.

Just before six, we formed a procession to the church. The limo was so long it took three hitches to make a U-turn at the intersection. Outside the church, street vendors experienced in such events sold hot elote and tamales to tide early arrivals over until dinner.

I found a pew and settled in. A quartet of musicians played and sang: a man with an acoustic guitar and three teenage girls accompanying him on tambourine, accordion, and a flute. They all wore black slacks, white shirts, and red ribbons tied in bows at their necks. The music wasn't hymnal at all. Light and lilting, full of joy, it soared throughout the church, echoing off the vaulted ceiling.

Other guests began filling the church, ten to a row on each side—I don't know how many rows—and spilled into the side pews. The priest led the procession from the entrance down the aisle, Nicole right behind him. Her chambelanes followed, then the padrinos(godparents). Rosella and José Carlos were next, and then Rosella's mother Alicia and her husband Sergio. A couple of little girl attendants brought up the rear.

The mass was more upbeat than I expected, more celebrating than preaching, even with the priest standing right in front of Nicole and talking at her for almost ten minutes. She smiled sometimes, nodding. Then she moved to the front of the church with a bouquet of pink flowers and paid homage to the Virgin of Guadalupe statue above her.

Leaving the church, I headed for the banquet hall five or six blocks away, where a sea of black and white and hot pink welcomed guests. Bouquets of white carnations spray-painted to the color of Nicole's gown filled the banquet room, with matching pink tablecloths and white draped chairs. An assigned seat at a table up front waited for me, with a place card saying Reservado.

After almost all the two-hundred guests arrived–suits and dresses for most, slinky miniskirts for chicas, shiny cowboy boots for some hombres–Rosella’s toast was first. Her toast testified to her love for an only daughter and offered advice from a single mother. Then she handed the microphone to me. I read what I had written months ago, what she had translated for me and printed out so I could practice en español for weeks.

In just ninety seconds, my speech described how I met Nicole, when Rosella was my interpreter on a trip to watch whales in southern Baja. How Rosella and Alicia and Nicole and her baby brother became like a second family to me–sonmi familia en Mexico–helping me after I retired and moved to Baja. How I had watched Nicole develop as a student and pursue her dreams as a dancer. How impressed I was that she always wanted the best, whatever it was—a skateboard, clothes, a cell phone, a notebook computer. How I hoped she would follow her dreams and always choose the best: “Sigue tus sueños, y siempreelige lo mejor,” I read from my speech. “Salud.” The audience cheered, despite my imperfect pronunciation.

By tradition, the quinceañerawaltz with thechambelanesis the Mexican girl's first ever public dance. Nicole danced with her attendants as a group, not a waltz, but an elaborate choreographed routine that featured waving hot pink scarves. José Carlos joined the others, strutting his stuff.

The family dance was next. Sergio was Nicole’s first dance partner. Rafael was second, and I was third. The music for “The Rose” stopped just before Nicole held out her hand to me, and an unfamiliar tune began. Uh-oh, I thought—this isn't the same slow beat I learned in six weeks of Mexican dance classes. I bent my six-foot body down toward her and heard her say, “I'll lead you.” Shuffling my size-twelve feet beneath her billowing skirt, I managed to keep from stepping on her toes as she led me through an up-tempo Mexican waltz. Then I bowed and kissed her hand before leaving the dance floor.

“You did good,” one of my friends said back at the table, searching for a compliment from her California rural roots. “Really good for a farm boy who can't speak Spanish or hear a beat.”

A hired norteño band wearing black outfits and matching cowboy hats started playing up on the stage, electric guitars and amplifiers blasting fast tempos at all of us. With the accordion and fiddle, it reminded me of Cajun music from my time in South Louisiana forty years ago, but louder. A lot louder.

A few Mexican couples showed off their dance steps, twirling around the forty-by-forty wooden dance floor. Rosella and her novio joined them, gliding without effort. It was a tough act to follow for someone with my dancing abilities.

The tuna aspic and cracker appetizers on our table ran out sometime about nine. Some other folks at our table borrowed a couple of trays from youngsters nearby who weren't as hungry. Dinner wasn’t anywhere in sight.

Meanwhile, Nicole observed the ritual of La Ultima Muñeca (the last doll)and theritual of the shoe, two other quinceañeratraditions. The shoes she changed into were her ballerina slippers, not high heels. Then she and six fellow dancers treated all of us to a high-energy dance routine, complete with disco ball lighting and a driving Latin beat. She twirled, dancing on point in her ballerina slippers, tiara flashing in the strobe lights. The chambelaneslifted her above their shoulders and carried her away at the end. The crowd went wild. Then the norteño band started playing again and more people danced.

The salad arrived just before ten, a fancy little thing of some green leaves and yellow slices of mango in a delicious sauce. All six bites were good. The entree arrived shortly after, a good-sized helping of pasta cradling a stuffed chicken breast with a dab of white sauce, a ripple-cut carrot slice, and a broccoli sprig. We talked the waiter into mascervezas. The band took a break, and somebody cranked up a soundtrack playing an American classic line dance number.

You haven't lived until you've been right next to a hundred or more energetic Mexican partygoers jammed onto a dance floor, twisting and turning in unison to the Spanish version of “Achy-Breaky-Heart.” They line danced to a half-dozen other songs too. All ages, all sizes, joined the fun, almost bumping into those of us with front row seats. A husband and wife each held a sleepy niño. Rosella's sister Aurora and her daughter danced barefoot alongside Alicia. Rosella’s other sister Cynthia, from Las Vegas, boogied with her teenage son. Right up front, in the video camera lights, Nicole in her hot pink dress blossomed like a colorful flower against a black and white landscape.

Arranging the event took almost two years, Rosella told me once. She booked the church and banquet hall more than a year in advance. Nicole took instruction from the church for months and practiced the dance routines for weeks. Family and friends sponsored specific items, and some of us contributed cash.

During a break in the music, I asked Rafael and Aurora if similar events and sacrifices celebrate the coming of age for Mexican boys, as bar mitzvahs and bat mitzvahs do for Jewish boys and girls back home. They had a teenage son older than fifteen, and their only daughter was next in line for a family quinceañera.

“Boys only get birthday parties,” Rafael said with a laugh.

“Daughters are special,” Aurora said with a smile.

I stayed as long as I could, longer than some other gringos at my table. I left just before midnight and missed the rest of the party, the part where they cut the cake and danced again until two in the morning.

I don't know if they had the traditional morning-after breakfast for family. Me, I slept late.

Some folks say you can see the future at family events, no matter what country. Birthdays. Holidays. Graduations. Weddings. Anniversaries. Even funerals. Nicole's quinceañera offered a great glimpse of her future, full of hopes and dreams and family love.

I’m glad I didn’t miss that.

(Ed. Note: This is a chapter excerpt from Miller's new eBook I Love Baja!, released on Amazon March 5, 2015. It's also included in an anthology by Mexico Writers titled Mexico: Sunshine and Shadows set for publication in May 2015.)