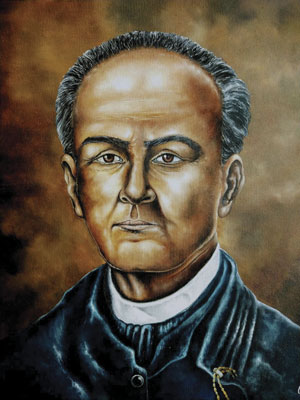 It might seem shocking that Catholic priests like Miguel Hidalgo and José María Morelos led a violent revolution. They believed that Jesus called them not only to save souls for a future in Heaven, but to establish justice here on Earth, especially for the long-oppressed Natives. This radical (and always Vatican-condemned) philosophy would reemerge under the name “Liberation Theology” in the 1960s when Jesuit priests led similar uprisings in Central America against vicious United-States-installed regimes.

Another such Mexican priest was Marcos Castellanos who continued Hidalgo’s and Morelos’s revolution on Lake Chapala, just south of Guadalajara. At the age of 65, he convinced 1,000 Natives to make Mezcala Island their base of operations from which to launch numerous attacks on Spanish garrisons along the lake’s north shore.

The Spanish governor vowed to annihilate “that group of brave insurgentes, who, in a few months and with such scarce resources, [have] humiliated [us] in four successive armed encounters.” He transferred 8,000 soldiers to undertake the grim task. However, since Castellanos had fortified the island with five concentric defensive walls (two of them underwater), Spanish counter attacks were futile.

After four humiliating years, the Spaniards resorted to burning all the local farms, finally convincing Castellanos—his Native soldiers exhausted, sick, and starving—to surrender. Normally, the Spaniards would have simply executed everyone; but, in a demonstration of rare magnanimity (and, perhaps, grudging respect), they allowed the Natives to return to their villages and families.

Castellanos became the priest for the Lake Chapala fishing village of Ajijic (where yours truly and many other expats now reside), sharing his Native parishioners’ abject poverty, and dying in obscurity five years after Independence had been won. He and his Natives had won nothing.

Today a town near the southern shore of Lake Chapala, and Chapala as well as many other villages’ have named streets in honor of Marcos Castellanos.