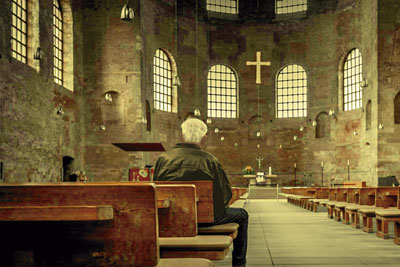 Moises was where he always wanted to be, in the first row of his church, San Jose, in his village, Nipomo, California. He sat in front of the image of La Señora de Guadalupe, La Morena, his mother. He was wearing the cracked leather jacket he had grabbed from the Goodwill donor bin thirty-five years ago. Native huaraches rested on his feet and his grey hair was spiked in bunches like happy weeds in the sandy soil.

Through seventy years of fieldwork he was always content, prone to smile if not to speak. He was most happy in his church surrounded by his own smiling people. With tan skin, flashing eyes and ivory teeth, they were a welcoming, accepting people who always made room for more in the pew. Golden sunlight shone through the windows. A cool zephyr flowed from open doors.

Waiting for the santa misa to begin, Moises’s mind roamed to the past. He heard his mother’s voice. “Mijo, Moises, my beautiful son, brush away the sleep from your head. Your father is gone. Today you will join me working in Sr. Takahashi’s field.”

Moises fluttered awake and rolled up his pad made of old blankets his grandmother had covered with masa sacks. The seven children slept on the floor in the back room. Their tarpaper shack didn’t leak only when it didn’t rain. The rent was $20 a week, paid in advance. Moises dressed for the new day in his only piece of clothing, thrift-store bib overalls. This was the daily routine he followed until age 18. No school. His mother and siblings needed the pittance he earned.

On June 27, 1950, President Truman committed US forces to stop North Korean incursion into South Korea. The draft would supply the manpower. The Selective Service did not aim directly at Moises, but after all deferments for age, schooling, and dependency were satisfied, he and those like him were sent to their misery at Chosin Reservoir and similar, hellish places to stop the encroachment of Communism.

Moises had no legal dependents. He was not enrolled in college. No physical condition would preclude his being drafted. He was a field worker, not in a critical, high-paying job. So he was just what they needed. Mexicans seemed to satisfy the Selective Service requirements. While whites were deferred, the poor and people of color were drafted.

Moises landed on the dry, desolate plains of Texas in a huge camp of wooden barracks, sand and wind. He had never been alone before amidst so many. He prayed, “Madre de Dios, help me so I do not cry. All the noise, the yelling, the gueros sergeants who call me bad names and show no respect. They shaved my head, took my clothes, and dressed me the same as all the rest, top to bottom, as a soldier. In shouted, English words, they told me when and where to sleep, to eat. They taught me to walk in a line called marching where I watched the back of the neck of the person in front of me. I saw sweat form and run down into his shirt collar. I guess the man behind me was seeing the same on my neck.”

Moises’s prayer was interrupted when he spied Ricardo in his platoon. “Mi nombre es Ricardo, amigo. Mucho gusto. I’m glad to see another here like me.”

“For me too. Seeing you tells me I’m not alone here,” Moises said.

Ricardo went on. “This wasn’t in my plan. I was in my last year of college when love came into my life. Hit me hard. I flunked out of school and the draft sent me here. I’ll finish up my education after this and I’m married.

Here they want me to be a ‘lean, mean, killing machine.’ I cannot do that; that is not me or what I was raised to be. I’m in the wrong place.”

Moises consoled his new friend saying, “Vato, we all are. Just keep your head down, your mouth closed, and this will be over and you can be paid to go to college by the VA.”

As parishioners were filling the iglesia para La Misa, Moises was depressed recalling the tragedy he had brought to his friend, Ricardo. It was late in their basic training when the sergeant handed him a loaded firearm with the words, “Now you will be a killing machine.” It might as well have been a rattlesnake. Moises kept his hands by his side as his friend, Ricardo, stood next to him waiting his turn.

The sergeant forced the weapon on Moises shouting in his face, “Take it, godammit, Spic, or you’re no use to us!” Moises put his hands out to repel the poisonous snake and his finger caught in the trigger guard. As the weapon hit the ground it exploded its bullet into Ricardo’s head. He would live but he would never see again. They put him in for a Purple Heart.

After Mass, Moises’s kaleidoscope of thoughts settled as he looked out the window of his daughter’s house. He saw an older Chevy sedan creeping along the street then stopping at the curb. A smart-looking woman stepped out of the driver’s side and walked to the passenger side where she opened the door. A white cane poked out, preceding a smiling face with opaque dark glasses. The pair walked to the front door of the modest house and just as they started to knock Moises opened the front door. The smiling man raised his head and said, “My brother, Moises, I have something for you. We have a little time on our way back from Salinas to East LA.”

“No, no, my brother. You must come in and stay for a while.”

“No, we must go but here, this is for you. You deserve it. I receive lifetime benefits; you get nothing to compensate for your pain.” Ricardo dropped a small water-stained box into Moises’s hand. “The day of the accident you were the one wounded. This is yours.”

Moises opened the box and held in his hand Ricardo’s Purple Heart.