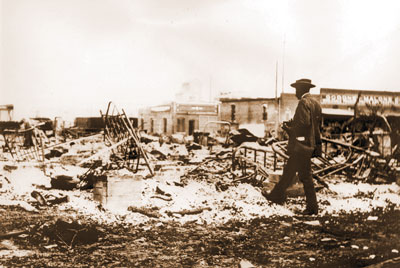 May 31 and June 1 mark the 100th anniversary of the destruction of the black community of Greenwood, a segregated part of Tulsa. White rioters massacred up to 300 black people, and the once-thriving community lay in ruins.

Greenwood was prosperous. People called it “Black Wall Street.” According to an exhibit at the Smithsonian, “Historians identify white animosity toward Greenwood’s economic independence as one of the leading causes of the riot.” The Smithsonian continues, “Before white mobs razed the town, they looted homes and local businesses.” An estimated 10,000 African-Americans were left homeless.

A black teenager named Dick Rowland worked as a shoeshine boy in Tulsa. Jim Crow laws required segregated restrooms, and the only one available to blacks was in the Drexel Building. A 17-year-old white girl named Sarah Page operated the elevator. Dick tripped getting into the elevator to use the “colored” restroom on the top floor and stepped on Sarah’s foot. Sarah was scared of black people, and she screamed. Dick, knowing the danger he was in, ran away. A white store clerk heard the scream and called the police to report a sexual assault. Police arrested Dick.

A white crowd that wanted to lynch Dick Rowland gathered outside the courthouse, chanting, “Give us the nigger!” The sheriff refused, and he and his six deputies guarded Dick’s jail cell for his safety. The mob grew to a thousand men.

The inquiry into what happened in the elevator concluded that Dick had done nothing wrong, and the sheriff released him. Dick Rowland left town, never to be heard from again.

Before Dick’s release, the Ku Klux Klan had lynched black people in the street. The sheriff had handed over a black man only the year before to a lynch mob. So a group of armed black WW I veterans came to the courthouse jail to save Dick from a lynching. A white man tried to take away a gun from one of the black men. The gun went off and killed the white man. After that, the white mob spread out through the streets of downtown Tulsa, shooting black people on sight. The black men retreated to Greenwood.

The white men decided to teach Greenwood a lesson, and the sheriff deputized them all. He handed out guns for the assault on Greenwood. They tried unsuccessfully to raid the National Guard armory for weapons. Thousands of them invaded Greenwood, first looting and then burning. Private airplanes flew over Greenwood to drop firebombs. The National Guard joined the attack, firing machine guns. Afterward, the community looked like a wasteland, with 35 square blocks turned to ashes.

The rioters burned, tortured, and dragged black men behind trucks until dead and shot many of them. And then, the National Guard arrested six thousand black men and guarded them for days at the local fairgrounds. Until 1990, when an Oklahoma State Commission issued a report, history books barely mentioned the Greenwood Massacre. The research was challenging because authorities had destroyed many records as part of a massive cover-up. The Commission knew there were mass graves somewhere, but they could not find them.

Journalism should write accurate accounts of events. Instead, the Tulsa Tribune published an inflammatory front-page story: “Nab Negro for Attacking Girl in Elevator.” The story reported in red-hot terms an attempt at sexual assault – except it didn’t happen. The Tulsa Tribune referred to Greenwood as “niggertown” and suggested a lynching was in order. Historians have attributed the Greenwood Massacre to the Tulsa Tribune’s sensationalism. It was glaring racist reporting.

Like so much racial violence, the massacre began with a false allegation that a black man had raped a white woman. After the riot, the Tulsa Tribune published a story headlined, “Two Whites Dead in Race Riot.” The paper made no mention of the 300 black people killed.

One hundred years later, Minneapolis police officer Derek Chauvin murdered George Floyd, an unarmed black man. The Minneapolis Star Tribune published the police report without question. They allowed the police to explain things away. The Star Tribune reported in a headline, “Man Dies After Medical Incident During Police Interaction.” Medical incident? “Police interaction” sounds much different from writing, “Police officer alleged to have choked George Floyd to death.” The article reported, “Officers were able to get the subject into handcuffs and noted he appeared to be suffering medical distress.” No, the crowd of onlookers told the officers about the distress – advice they chose not to hear. “Officers called for an ambulance. He was transported to Hennepin County Medical Center by ambulance where he died a short time later.” No, George Floyd died at the scene. Dr. Martin Tobin, a pulmonologist, testified that George Floyd died from asphyxiation under Officer Chauvin’s knee and identified the precise moment on the video when life left his body. “No officers were injured in the incident.” Well, no, George Floyd was in handcuffs and couldn’t have injured any police officers.

The police statement was a big lie, and the Minneapolis Star Tribune should not have fallen for it. Journalists have to be skeptical of their sources and to verify. The Star Tribune should have known that Police departments are notorious for cover-ups.

A 17-year-old girl named Darnella Frazier exposed the lie when she recorded the event on her cellular telephone. Worldwide protests forced the case out of the county district attorney’s authority to the state attorney general, Keith Ellison.

Freedom of the press assumes journalistic responsibility. That responsibility must include critical thinking and skepticism. The Minneapolis Star Tribune failed when they carried the police report that blamed the victim for his death. The common thread between the Greenwood Massacre a hundred years ago in Tulsa and the choking death of George Floyd is systemic racism.