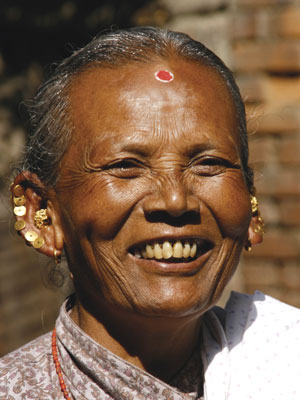 You see some strange things during your first three months as a Peace Corps Volunteer. And if you’ve been assigned to a scruffy little village on the Nepalese side of the border with India, you notice some strange things indeed. I was therefore fortunate to have rented my rooms from a Brahmin, Babujee, who became my surrogate father, mentor, and explainer.

One hot afternoon, sitting on the porch together watching villagers pass by on the dusty road, I asked him about the gold earrings that some Nepali men and boys wore that penetrated the fleshy cartilage at the top of the ear opposite the lobe. He explained that because infant mortality was so high in Nepal, a male child who reached adolescence was awarded a gold ring, but only if he is the sole male, the surviving male. When he learned that I was the sole, surviving male in my family, he insisted I wear the gold earring, and he knew just the right person to pierce my ear. Two years loomed ahead of me, so I thought, Well, when in Rome…

Several days later, arrangements were made, and I found myself in a thatched roof hut sitting on a high stool waiting patiently for the procedure. The cooling monsoon rains were just around the corner but yesterday, today and the next day were as hot as a crematorium. Suddenly a figure in a sari appeared, and I had to do a double take.  If ever you were trying to imagine what a crone looked like, this lady fit the bill. She wasn’t a day under ninety but possessed a winning and reassuring smile. She also possessed a large needle in her gnarly fingers about the length of a toothpick, and, like a toothpick, thickened some in the middle. I shuddered a little and shuddered even more when she pulled a thread from the decorative yarn adorning her pigtail and began threading the needle.  There was no attempt to sterilize the needle or thread. The Nepalese language doesn’t even have a word for germ.

A brief minute later, she was piercing the top of my right ear which I didn’t much feel, but as the needle pushed through and into the thick middle, I came right up off the stool like a stuck pig. My crone finished her penetration with a smile and the words deri ramro—very good.  She left a little circle of thread to make sure the hole remained open until I could replace it with the gold ring.

Babujee said he knew a reputable jeweler just across the Indian border.  The next afternoon, I entered the shop of Ram Bahadur who was sitting near a fire pit with one foot operating a bellows to keep the fire white hot. After we agreed on a price, he proceeded to super heat a small cube of gold in a mould until it was molten. As the gold cooled, he teased out a ring in the shape of a teardrop and let it cool before inserting it in my ear hole. He twisted the ends to make it permanent.

Even though the resulting infection was red, swollen, and painful, I later realized that choosing to wear a Nepali earring was among my better decisions. For the next two years, it opened doors, prompted questions and conversations and caused a stir wherever I travelled in Nepal. It gave strangers permission to ask me about the ring in an American ear and, by the way, how’s your family?

Back in Washington D.C., Peace Corps offices, I was advised to remove the ring before flying home to Omaha.  “There’s a jeweler just down the block, Mr. Sconce.”