City Of The Gods 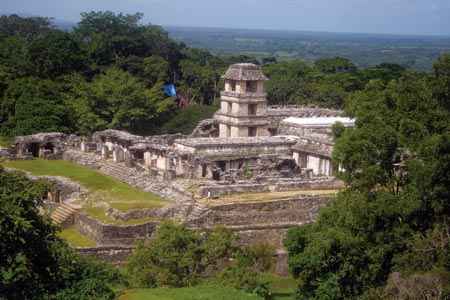 The gods tried three times to create humankind. First, they made men of mud who melted and fell apart when it rained. Their second attempt was with wood but these humans were stiff and heartless and had no soul. Finally, they breathed life into sacred maize and people with flesh and blood appeared.

These first true humans had perfect vision. They could see everything the gods were doing. Alarmed, the deities took away this powerful ability. However, they left human beings with the means to overcome their short sightedness—the Popol Vuh or Maya Bible.

This story of the dawn of life seems completely plausible as Judy and I step off the bus into the droning late afternoon heat of the small town of Palenque (pah-LEHN-keh) in the foothills of southern Mexico’s Chiapas Mountains. We are here to see the art and architecture of one of the most highly developed ceremonial centers of the Classic Maya.

From humble beginnings, Palenque enjoyed its fluorescence 1300 years ago when it became the unchallenged centre of Maya religious expression. Priests, astronomers, mathematicians and nobles presided over an elaborate ceremonial life, forecast the moods of the gods and developed a calendar more accurate than our own. Plumed and jeweled warriors protected artists as they created magnificent sculptures and portraits. It was a city of contrast, of life and death, of light and darkness—where T’uup, keeper of the sun lived next door to his brother Kisin, the god of death.

It has been a lifelong dream, to climb the pyramids and stand in the homes of the gods where once theocrats had conducted mysterious rites, and where now even tourists speak in whispers. But first, we must decipher the bars and dots of the still-used Maya numbering system to find our motel room. Next morning, just after daybreak, the door creaks open and we are invaded by a young squealing wild pig who takes over our shower and defies every attempt to lure her out. Later I find out the pig’s name is Petunia. She hangs out at a local bar and patrons feed her beer.

Heading to the site, we pass a white statue of an ancient Maya. His head is thrown back and his eyes are wide open as he gazes at the sun. The aquiline profile, rooted in the present, seems to stare at both past and future. The image stays with us as we climb the limestone hills rising from the green floodplain of the Usumacinta River.

Suddenly Judy gives a whistle of excitement. We have arrived. Palenque is located in a forest of mahogany and cedar. Shining white temples are set against a background of dark green rain forest, a forest that vibrates with the calls of parrots, macaws and toucans, each dressed in a shimmering red and blue feathered coat. This is not only a place for gods and man; we catch glimpses of monkeys and reptiles, and sense jaguars hiding in the shadows.

Yet, today is a pale image of the past. I close my eyes and imagine the city filled with people, every building covered by brilliantly painted mythical and historical figures. Reality blends with imagination when we encounter small people with long black hair dressed in ankle-length white smocks. They are Lacandon Indians—the last Lords of Palenque and the spiritual heirs of Maya priests whose roots probably lie in the prior Olmec civilization which flowered on the Gulf Coast 3000 years ago. Still practicing ancient rites, the Lacandones are the guardians of one of the oldest unbroken religious and cultural traditions in the world.

The Temple of the Inscriptions dominates the city. We start to run up the 23-meter central staircase. Halfway, we are forced to stop, soaking wet and gasping water-saturated air. Subdued, we finish our climb to the temple and find it covered in glyphs and bas-reliefs.

My eyes are immediately drawn to the floor. I have read the story of how Mexican archaeologist Alberto Ruz moved a huge carved stone slab and discovered a rubble-filled stairwell. It took him four field seasons to clear two long flights of stairs which descended to below ground level inside the pyramid.

We inch down the narrow dark stairwell trying not to fall on the wet slippery stones. The poor light obscures the next step. We beat back claustrophobia, reach the bottom and step into the corridor where Ruz was stopped by a solid stone wall. The musty twilight hides the ghosts of six youths sacrificed here and left as guards for all eternity. Behind their skeletons Ruz encountered another huge triangular slab. Turning it exposed a crypt. Nine larger-than-life stucco priests still guard a sarcophagus that was covered by a massive lid. Under it was another lid and beneath that the jeweled and ornamented body of Lord Pacal, Ruler of Palenque, who died in AD 693.

We retrace our steps, away from the tomb’s shadowy oppressive heat. Directly to the north is the Temple of the Count. For two years it was the home of Count Frederick de Waldek. He was 70 when he lived here with a lady friend. At age 100 he published his fanciful theories on Palenque. Nine years later he died in a street mishap when he turned to admire a pretty girl.

On our right is the Palace, the most complex mid-Classic building in the entire Maya world. It is dominated by a central four-story tower. According to the Lacandones, the tower is the house of T’uup, keeper of the sun. Archaeologists believe it was an astronomical observatory and lookout. The Palace is a labyrinth of rooms and open patios. In one we find portraits on slabs. One nude figure has his hands tied behind his back.

The Lacandones assign each building to a deity. The Temple of the Cross used to be home of K’ayum, god of music. Only two of the buildings are still occupied by gods. Two brothers of T’uup tried to murder him. They are sentenced to remain here, watching the turistas, until the end of the world—a punishment to fit the seriousness of the crime.

These magnificent structures reflect the knowledge acquired when humans could see everything, that all things are related! T’uup’s tower points to heaven while next door the Temple of the Inscriptions is a conduit to the dreaded underworld. Standing between them, I feel the ageless link between the two powerful domains.

Passed down to the Lacandones is the belief that the roots of all living things are tied together. A star dims in the firmament when a tree is cut down. When we destroy our earth, we destroy our heaven. Many stars no longer shine. Much of the Lacandon forest is gone. As each mahogany tree falls, as each jaguar dies so too will the Lacandones disappear. When they die the world will end and only Palenque, the home of their immortal gods, will remain.