The Price Paid For Cigarrettes 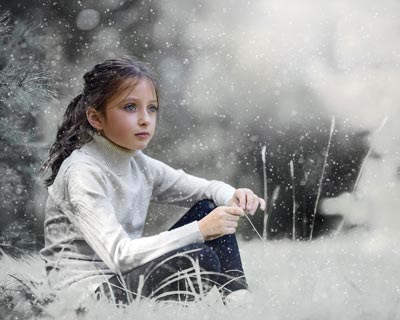 On a Saturday night in December, I was about to put on my pajamas and go down to say good night to Grandora, when she called up to me. “Kya, I need you to go to the store for me.” She was out of cigarettes and George had refused to go.

“A blizzard is brewing. You’ll need to wear a sweater under your coat, put on your galoshes and George’s heavy scarf that is hanging in the coat closet,” Grandora told me. “It’s only a few blocks. Be careful crossing the intersection. You’re not nervous about going out at night, are you?”

I trudged through the deep snow of our back alley to the side parking lot of a closed diner and onto the sidewalk. The businesses that had been scattered along Greenfield Road had closed up. All was black except for an occasional car, wheels spinning, kicking up snow in its wake in the unplowed road. Although I must have been eight or maybe even nine at that time, how I remember it is that the snow was up to my knees as I struggled to move along, but that must have been ten years ago. It is said that I had been small for my age, so I suppose that is possible. I walked toward the lit bulb dangling on a telephone pole where there was a cross street, half a block’s distant. I crossed to the other side of the road there, so I would only have to deal with crossing one street when I came to the intersection.

As I shuffled along in the dark toward the next bulb, now and then a car would crawl by lighting up the falling snow in a blinding flash of brightness. And after it passed, the blackness would return. It was not until after I walked through that second cross street and the dark returned, after being able to see the promising traffic light a block’s distant and the overhead sign of the Westgreen all-night market beyond that, that I became afraid.

I could hear someone walking behind me. With the heavy scarf leaving little but my eyes exposed, I wasn’t able to look back. When I stopped, the footsteps stopped. When I tried to move along faster, I couldn’t because of the snow. The headlights of a slowly moving car that was approaching from behind made a shadow of my small stature with a gigantic person following me at close range. My heart started to pound. My breathing became heavy. My eyes riveted on the Westgreen sign, a beacon of hope that kept me from panicking as I walked steadily along as fast as I could, with the footsteps behind me still echoing mine.

At last I reached the intersection. By then my panic had reached a crescendo. I was just a few yards away from the store and safety, but as I began to cross the street, an arm reached around and grabbed me by the shoulders. As I toppled backwards, I let out a piercing scream. A truck making a sharp left-hand turn left me and my follower covered in slush.

“Lucky you didn’t get killed!” my follower, who turned out to be a stocky woman, exclaimed, brushing herself off. We looked each other over. “Why, I thought I was following a dwarf, and here you are, a young girl,” she exclaimed. “I don’t know what you’re doin’ out here, but you follow along behind me as we cross this street.”

Stunned, I don’t remember making a reply, or even thanking the woman. I only remember the fierceness of my trembling as I at last entered the Westgreen store. Except for the man behind the cash register, the place was empty. I leaned against a shelf to catch my breath and gather my wits before walking up to the counter.

Slapping them on the counter, he said, “Is that all?”

“What note?” I answered, my eyes wide.

“The one giving you permission to buy these cigarettes.”

“I’m sorry. I can’t sell you these cigarettes without a note. It is against the law to sell cigarettes to a minor.”

I was in shock. How could this possibly be? I thought.

“Okay, okay,” he replied,” but next time you’d better have a note.”

As I was about to leave, I remember him saying, “Listen, girlie, the next time your grandmother tries to send you to buy her cigarettes, you tell her to go buy her own.”

The warmth of the store must have melted the snow and slush I had been coated with, because when I stood before the intersection to head back, I felt I could freeze to death, it was so cold. I don’t know if it was from fear or the increasing cold that my trembling increased. The light turned red for me to cross, however, all I could do was stand before the intersection shaking. A car drove up blocking the crosswalk. A man, leaning over, rolled down his passenger window.

“What are you doing out here this time of night?” he asked. He had a nice car, so I figured he was trustworthy.

“I went to get cigarettes for my grandmother,” I replied, my teeth chattering.

“Well, you’re going to freeze out there. I’ll drive you home,” he said, pushing the car door open. For a moment I paused. “Well, don’t just stand there, get in!” And I did.

I hadn’t quite closed the door when I turned to look him over. He wore earmuffs and his bushy eyebrows almost hid the hardness in his eyes. His jaw was clenched in anger. I started to push the door back open in an attempt to jump out before he drove off.

“Shut the door,” he demanded with authority. And I did. “How do we get to your house?” he asked.

“You have to go down Greenfield Road that way,” I stuttered, pointing left. I felt hopeful when he got his car turned around and we were headed in the right direction. “Turn left at the second street, go one block, then turn left again,” I told him. My heart was still pounding as we approached the side street where we were to turn. He didn’t slow down and I noticed he didn’t turn his blinker on.

“Can’t see a dammed thing in this snow,” he said.

“Turn here—here!” I shouted, and to my relief he did.

He pulled up in front of Grandora’s house and turned off the motor.

“Thank you for the ride,” I softly said before I got out.

“I’m going to the door with you to give that grandmother of yours a piece of my mind,” he snarled.

The survivor in me replied, “No, please don’t. It wouldn’t do any good. It would just make her angry.” We sat in the car in silence for a few minutes before I said, “I’m going in now. Thank you for not going to the door with me.” Stepping inside the vestibule, I waved goodbye, and he drove off.

“Did you get my cigarettes, Kya?” Grandora asked. “I forgot to give you a note.”