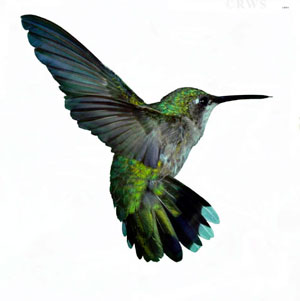 Do humming-birds have a ‘pecking order’? We would have thought not before we encountered the bird we named “Sennacherib” after the vicious king of Assyria who “swept down like a wolf” on the Israelites, as recorded in the second book of Kings in the Bible.

This tiny creature had the self-image of a goshawk! Until coming to Mexico in 1995, we had lived in the frigid north country better known as Michigan, where few hummingbirds venture. On arrival in Ajijic, we were bewildered by the number and variety of “hummers.” We bought a feeder and a small bottle of pink concentrate to feed our little visitors.

They delighted us as they performed aerobatics as they swooped down to enjoy the sweet liquid in the feeder. Until one morning a small non-descript hummer attacked those already at the feeder. Once he had cleared the area, he flew off and perched himself strategically on the highest twig of a bougainvillea bush, close by. He kept a close watch on the feeder, and zoomed in to drive off any trespassers.

We watched, fascinated by the little bully’s ability to drive away all comers. We bought several more feeders hoping we could confuse his tactics.

From his vantage point he seemed to have 360 degree vision and he swooped to defend every inch of what he clearly considered his territory from all-comers. By that time we had named him Sennacherib. We were determined to put a stop to his scandalous behavior. We decided to remove all the feeders, in the hope he would finally realize he was ‘cutting his nose off to spite his face.’

Once he had lost interest in our garden we replaced the feeders one at a time, and were delighted with the swarms of little birds that returned to enjoy the nectar they so desperately needed.

Sennacherib never returned. We concluded he had found another territory, where he was terrorizing the birds there. At least ‘ours’ were safe at last.