Return Of The Orchid Salesman 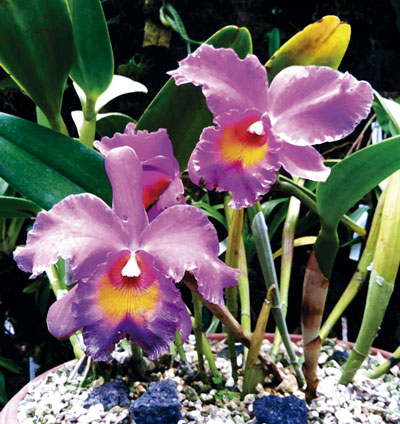 The man had once stood in the woman’s Chapala garden offensively shaking handfuls of wild orchid plants before her as if they were rattles. After moving her live-in gallery to West Ajijic twelve years later, she encountered him again. He was dodging between the cars pulling into and out of parking spots in front of Farmacia Guadalajara. She learned later that he had been prohibited from selling his orchids on public streets and in the plaza because the local government had been under pressure to enforce the law prohibiting the sale of wild flora. I suppose it was because the parking lot was private property that law enforcement turned a blind eye on the orchid salesman who had become old and decrepit before his time.

The woman tried not to look at him as she pulled into the pharmacy’s parking lot, but it was impossible to avoid his relentless presence. Her gaze became fixated on the clump of silky lavender orchid blooms clamped together between slabs of bark and entwined with coarse wire biting into the flesh of their bulbar roots. All she had wanted to do was use the ATM, and now her day ruined! How dare he take those orchids snatched from the wild and sell them like chattel on the street?

On her next visit to the ATM, however, she took a more in-depth look at the salesman and wondered if indeed his plight was not equal to, if not more than, that of the illegal orchids. Since she had seen him when he was in his prime hawking orchids on the byways of Chapala, he had become unpalatable and unbathed, legs wobbling beneath him like rubber. His eyes now stared off into nowhere, as if covered by faded film. He arrives each day propped up on one arm by his fresh scrubbed portly wife. She looks strangely displaced perched on the curb on the other side of the parking lot, reminiscent of a Midwestern farmwoman in her scalloped straw hat, imported from China, bedecked with artificial posies.

“How many years has that man been selling wild orchids at Lakeside?” she asked the store manager. “Forever, or at least before I was born. That’s all he knows. He was once a respected man. That was before the law against selling orchids made him a criminal. Now shame lingers in his footprints,” he sadly replied.

A year went by before the woman, who lived in her weaving studios in West Ajijic, realized that the orchid salesman and his wife passed by her place on the walk from where they lived in San Juan Cosalá on the way to Farmacia Guadalajara. After that, she began getting up early to watch them shuffle past her place, he clutching onto a bundle or two of orchids to sell, and she holding onto her hat with one hand and steering him so he didn’t   wander into the street with the other. From her second floor veranda the woman focused the lens of her camera to get an intimate shot. However, that felt as wrong to her as the snatching of wild orchids, so she put the camera away.

She missed the couple, a prelude to her day when they no longer trekked by her place on the way to Ajijic. “Do you know what happened to the orchid salesman and his wife?” she asked her gardener who seemed to know everything. He paused from his task of clipping off spent flowers in her rose garden. “We remain the same, Jefita, but the passage of time changes everything, and we can’t stop it,” he replied.

It was months later, around midday, the gates of the front gallery folded back   to open it onto the street, when the orchid salesman wandered in. He was alone. He seemed confused and desolate, but, as usual, was clutching a clump of orchids. “Can I be of help to you?” the woman kindly asked.

After circling the room and bumping into a rack of fiber art, barely keeping his balance, almost incoherent, he mumbled, “Is this Farmacia Guadalajara?”

“No,” she replied. “The farmacia is about two kilometers up the road.”

It couldn’t be said that the woman made a bad decision in buying the orchid salesman’s clump of illicit orchids so he could return home, as it turned out that his wife had died. Anyway, that is how the woman with the best flora intent became a collector of the widower’s forbidden orchids.