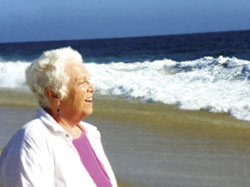 When she let go of her life as she knew it, Rita Golden Gelman connected with something larger: a lifestyle with no permanent address, baggage filled with memories not mementos, and an infectious desire to encourage everyone she touches to connect with others – whether it’s across the globe or across the street.

In 1986, at age 48, Rita left an elegant life in Los Angeles, got rid of everything she owned (no storage!), packed a backpack and took off alone.  She traveled through Third World countries where her dollar stretched further, shunning hotels in order to stay with families so she could immerse herself in their lifestyles.  Often, they spoke no English.

“But everyone speaks laughter, food and music!” Rita smiles.  “So, I laugh, cook, sing and dance right along with them.”

“My becoming an eager student dignifies their way of life and enriches mine.  I ask my hosts to teach me…their language, their customs, their dances, their games.  I connect with them while cooking rice, weaving offerings, exchanging songs, going to ceremonies, playing volleyball, and sometimes working in their fields.  We communicate through activities, eye contact, smiles, laughter, gestures…and sometimes tears.”

“More often than not, my feeble attempts to learn [their customs] create laughter — at me and with me.  That’s when the barriers crumble.  My tortillas have holes in them, my woven creations are lopsided, and the basket I’m trying to balance on my head falls and we all laugh as the fruit rolls across the yard.  And when I cannot remember the new word I repeated a dozen times just five minutes ago, I am no longer a representative of a more ‘advanced’ culture.  I am, instead, like a child, only somewhat slower.”

Fifteen years into her nomading, Rita wrote an engaging memoir, Tales of a Female Nomad:  Living at Large in the World, about her on-the-road experiences of connecting with people across cultures, languages and geographic barriers.

“I rarely know where I’ll be six months from now,” Rita writes in the preface.  “I move through the world without a plan, guided by instinct, connecting through trust.  I settle in with the locals long enough to share the minutes of their days, to know the seasons of their lives, and to be trusted with their secrets.”  Rita may be routeless, but with her ability to connect with people wherever she goes, she’ll never be rootless.

In 2010, she followed up with an anthology, Female Nomad & Friends:  Tales of Breaking Free and Breaking Bread Around the World, 58 stories and 33 recipes by ordinary people connecting through traveling in extraordinary ways.  She continues her successful career writing children’s books.

At 76, Rita still has no permanent home or possessions, but she does have a new passion:  Breaking the high school/college track to make it culturally acceptable for young Americans to take a “Gap Year” and travel.

“I’m focusing mostly on high schoolers after they’ve graduated but before they enter college, the work world, or the military.  Travel at any age is a life-changing experience, of course, but returned ‘gappers’ are much better prepared to make decisions and to think about their place in the world.  They’re better prepared for life! Colleges know this – so do employers.

“When a Gap Year becomes the thing to do, our population will respect and understand other cultures; intolerance, prejudice, and fear will dramatically diminish. By expanding the Gap Year, we will grow a population of people who have touched and been touched by other ways of life.

“After 28 years of connecting in other cultures, I know that the path to peace in the world is face-to-face interaction,” says Rita.  “When hearts have touched, everyone sees the world with new eyes.”

(Join Rita Golden Gelman at Open Circle on Sunday, May 25 at 10:30 at LCS.  Fresh off a TED Talk in Portland, OR, Rita will talk about the joy of connecting. … about living with Zapotec Indians in Mexico, with a royal family in Bali, with Maasai tribesmen in Tanzania. She tells about getting to know teens in a slum in New Delhi and singing in New Guinea with tribesmen who still hunt with bows and arrows. She will conclude by sharing her current passion: Volunteering with AmericanGap.org to encourage American teens to experience other cultures before they go to college.  Warning:  You may be inspired to just take off!)