Are We Really Out Of Iraq? 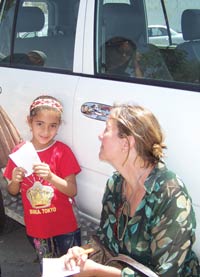 I’m going back in August to find out. Iraq first captured me in February 2003, five weeks before my country captured it. I returned three months after the US-led invasion to find the Iraqis who had so deeply touched me. I wrote about my encounters for my local newspaper. That was ten years ago.

In the interim, I’ve run for public office, taken a sabbatical from my political consulting career, nearly finished a book about my experiences in the Middle East with Iraqi and Palestinian refugees and addressed hundreds of audiences in seven countries about the Iraqis I’ve met.

In the interim, I’ve navigated Palestinian schoolchildren through checkpoints in the West Bank (and was held at gunpoint myself), consoled mothers in Lebanese Palestinian refugee camps whose families were murdered during the 1982 war, played with Iraqi refugee kids in Damascus, and helped clean up New Orleans’ ravaged Ninth Ward, where I heard the same sentiments from Louisiana’s evacuees as I did from Syria’s Iraqi refugees:  “Our families are scattered.”  “Our histories are lost.”  “Our lives are in limbo.”

In writing about these people in “limbo,” I’ve connected with their desire to make their loss worth something, to make their new lives bigger somehow than the lives that were taken from them. As “at home” as I feel among the world’s homeless, I’m still haunted by Iraq, haunted by the shameful and deceitful profiteering from a handful of politically connected weapons contractors and the impact the invasion and occupation had – still has – on moms and dads and kids. For years, I’ve asked a friend in Baghdad if it were safe enough for me to return and he’s steadfastly put down his foot.  Now, he says, it just might be.

Abdullah moonlighted as a waiter at the hotel where I stayed during my first, pre-war trip. He stayed in touch with many in our group of American peace activists. During my second trip, we shared sticky chai at the Palestine Hotel, where he was the head gardener – and where he had cleaned the room in which two German photojournalists were shot and killed by US troops as they documented the tanks’ entrance into Baghdad.

Five years later, Abdullah and I met again in Damascus to where he and his family had fled a month before my arrival.  For my book, Abdullah organized a series of interviews to illustrate a day in the life of an Iraqi refugee. “It’s all lines,” he told me as we sketched out my visit to a health clinic, a pharmacy, and United Nations giveaways.

Now, Abdullah is back in Baghdad and will facilitate the logistics of my return trip.  “It’s all walls,” he warns me of the barriers and checkpoints erected throughout the city to separate extremist factions. I have my own personal walls to scale to make this trip in August. Logistical, financial, emotional walls. During the next few months, I’ll roll out these considerations in a monthly column I’ll post on my web site.

Right now, I’m looking at the finances.  I’ve budgeted $20,000.  Abdullah wants me to stay at a hotel with a security guard; I want a hotel with reliable internet. Neither is a luxury;  no one wants me at an internet café at 10:00 at night.  Rooms in these hotels cost an eye-popping $300 US/night!  For a ten-day trip, that’s $3,000 just for me and another $3,000 for Abdullah, who I don’t want traipsing home to his dicey neighborhood after a day of helping an American.  (And, selfishly, I’ll feel safer with an English-speaking ally to help me if there’s a late-night emergency.  During my last trip to Baghdad, the nights shook me the most – explosions that rippled through my body, sudden darkness as electricity died, late-night feelings of isolation and vulnerability…)

I will stay only ten days;  after that, more onerous visa requirements kick in. For example, blood samples are required – presumably to limit HIV – from longer-staying visitors. I will need to pay for a translator and a driver, costs that get inflated to incorporate the danger of assisting an American that these Iraqis face long after I’ve left the country.  I’ll cover daily meals for all of us.  And gasoline.

Incorporated in my budget is Hostile Environment Training. Former UK soldiers train reporters, freelancers, aid workers and contractors in situational awareness and emergency first aid.  Trainers put participants through actual kidnapping scenarios by hooding them and holding a gun to their heads.

I’ll be blogging at www.LivingLargeInLimbo.com/blog. Additionally, I’ll be conducting a pre-trip media tour to engage more people in the question “Are we really out of Iraq?”

It’s tough. We have so much bombarding us every hour, who can keep up with the impact of a decade-old foreign policy? We might – or might not – be out of Iraq, but are Iraqis really better off now?

I’m going back to Iraq to find out.

(Ed. Note: Kelly Hayes-Raitt is the award-winning author of the forthcoming journalistic memoir Living Large in Limbo: How I Found Myself Among the World’s Forgotten. She blogs at www.LivingLargeInLimbo.com.  Follow her trip back to Iraq by visiting www.AreWeReallyOutOfIraq.com for more information. She will be elaborating on her trip preparations and Iraq’s current status at Open Circle on April 14 at 10:30 at LCS.)