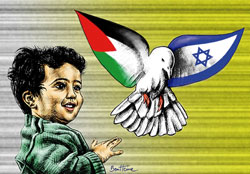 (Ed. Note: On May 6 at 10:30, Kelly Hayes-Raitt will address Open Circle at LCS about her experiences traveling through Israel and the West Bank, where she interviewed Israelis and Palestinians engaged in some of the most innovative and inspiring peace and reconciliation efforts.  This essay is an excerpt from her forthcoming book Living Large in Limbo:  How I Found Myself Among the World’s Forgotten.  She blogs at www.PeacePATHFoundation.org.)

My mother always said the hardest thing in life is to lose a child; it defies the natural order. Yet, this place that has lost so many children, this place so filled with perpetuated pain, has spawned the most innovative, inspiring efforts that fight through conflict.

Soldiers speak out through Breaking the Silence and Combatants for Peace. The Jewish and Arab pioneer residents of Neve Shalom~Wahat al-Salam live cooperatively and have for decades. Religious leaders bear witness through groups like Rabbis for Peace. High school students now go to jail for refusing to go to war. Lawyers painstakingly document abuses that no one else will. International activists stand up to bulldozers intent on destroying Palestinian homes. These are people redefining the natural order, people with the courage to let go of being right.

Of all the groundbreaking efforts, the group that impresses me the most is the one that, in the words of one member who addresses us, is “The only organization on earth that does not seek new members.” The Parents Circle Family Forum is a group of parents and family members of Palestinian and Jewish children who are the conflict’s casualties. These bereaved parents realize that religious, political or historical differences pale in comparison to their common grief.

During our delegation’s last evening together, two men sit side-by-side in overstuffed chairs in the dingy living room of a hostel in Jerusalem’s old city, steeling themselves to once again tell their stories. In accented English, Palestinian Ibrahim Khalil, 41, begins:

“I have two daughters and a son,” he starts evenly. “I educated my family to be peaceful. I am a peace activist. One day when I got home, I saw many soldiers and two or three ambulances. I saw my family crying and shouting. I saw the only son I have [covered] with blood. There is no way to describe it. Every day in the morning, you touch his head, you play with him. Then one day it’s over.

“…Just for one reason my son was killed: He’s a Palestinian guy. I used to ask him, what do you want to be? He would answer, ‘Doctor.’ But now, all the doctors in the world cannot help him.

“He was killed by a settler. His mother saw what happened. Should I go ahead as a peace activist?” the large man pauses, challenging us. “Or should I kill an Israeli settler? This is not the message of my son.”

His words hover in the dim light. “If I knew [that] the settler who killed my son would listen to me, I would go to his house to help him. It’s important to know what he is thinking. I would ask, ‘Why do you choose this way of killing? You lose a part of your heart. This is not the message of my son.”

Jew Rami Elhanan, 57, picks up: “Before everything else, I am a human being. Yom Kippur is our Day of Atonement, our holiest day of the year. Thirty-four years ago, I was a young soldier [sent to Lebanon as a paratrooper]. I lost some of my very best friends. I came out bitter. Twenty-three years ago on the eve of Yom Kippur, my daughter was born. She was a very sparkling, vivid little girl – Hadassah. We were very happy. Until ten years ago, 4 of September 1997, when two Palestinian suicide bombers blew up my bubble. On Ben Yehuda Street in Jerusalem, they killed five people… She was 14 years old. You find yourself running in the streets, running from hospital to hospital, police station to police station and then you see a sight you will never forget and then you go home and the house is filled with people.

“On the eighth day [after sitting shiva], the house is quiet and you have to make a decision, you have to get up. You are not the same person. When someone kills your 14-yr-old girl, you get angry. You start asking yourself questions. You ask yourself, if I kill anyone, will it bring her back? The answer is, ‘Certainly not.’ Gradually, you come to the other option: What can cause someone to be that angry to blow himself and a 14-year-old girl up? “

“He,” Rami touches his Palestinian friend’s arm, “was one of the thousands of people who came to my house during the seven days. I was so angry; how could he come to my house when my daughter was just killed and talk about peace? I had never met a Palestinian before,” he said with incredulity. “I went to the Parents Circle; Palestinians were hugging me and sharing my pain.” Rami shook his head, “This is not our destiny to have people killing each other. We can break this cycle. If you are able to listen to the pain of the other, then they will listen to your pain. After one of my talks, the brother of [one of] the suicide bomber[s who killed my daughter] came to shake my hand. I said, ‘OK, let’s shake.’ He’s now a member of our group. You don’t look back, you don’t judge or find who to blame. It won’t heal anything. The only way out of this endless cycle is to look forward. I’m the son of a Holocaust survivor. My father was at Auschwitz. [Now] my son is a founder of Combatants for Peace. Like any power, you can use pain to bring more pain or to bring light and hope. Our pain,” Rami runs his thumb in the air between himself and Ibrahim, “is exactly the same pain. If we, who paid the highest price, together can make peace, anyone can.”