Mirror To The Universe 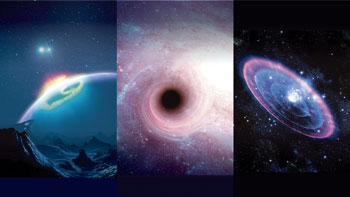 “Music can name the unnameable and communicate the unknowable.” Leonard Bernstein

When I was a child my uncle John Edmond MacQueen, a Davidson graduate, played Opera every evening. The tragedy of Puccini’s La Boehme haunted, and the simplicity of Verdi’s La Traviata lifted my spirit. My uncle loved them all and ensured that my mind would be filled with the power of their sounds. Later, Bach’s simple melodies enchanted me, and nurtured my creative instincts. Music transforms and fortifies my humanity.

Artists, from the Paleolithic period until today, have risen above social norms to create worlds of sound, visual masterpieces, literature that opens vistas, and dramas that feed the human soul. I have recently added Quantum scientists to this creative family. Artists and Scientists collectively sift through the sand of the earth for flakes of gold. Their music, paintings, sculptures, stories, and interpretations of reality are imbued with the power to enchant, and through ritual performance transform us and bring into being spiritual formations never before imagined.

They are the true sorcerers of the earth.

Quantum physicists have recently discovered that music uniquely effects the basic mechanism of our minds and bodies. More astounding, their research indicates that the universe is sustained by musical harmonic vibrations. The universal soul, of which we are a part, is structured according to the geometry of these musical tones. The information imparted guides and informs matter (including all life forms), energy, space, and time. Art and science have a universal connection.

Music is the language of creation.

Harmonic waves (musical tones), connect via an intrinsic cosmic energy exchange with field-receptive entities (like the human mind and body). This exchange integrates the past and anticipated future events, and enables rapid brain response to stimuli. We, via this spiritual exchange, are informed subconsciously. This vital musical connection links humans (and all living beings) with cosmic information which enables evolution, consciousness, intuition, providence, serendipity, extra-sensory perception, and qualia. Reception and recognition of this information forms the complementary unit we perceive as reality.

Artists, connected through all of the above modalities, assemble previously unknown creative works that point to new worlds of understanding.

Music, which humanity creates, the sound, beat, rhyme, and meter, is also causative in the development of human consciousness. Throughout human history the sound of the human voice, through both music and rhythmic poetry has lifted our humanity. Mothers sing to their babies to put them at peace, but the impact on the baby’s awareness is much greater. In all human societies, from our Paleolithic beginnings, to the piano concertos played by Murray Perahia, music conveyed by the human voice and instruments, has been a core element of human communication and culture.

Embed ritual music is also a component in a trans-formative process which is central in spiritual encounters during human religious and secular ceremonies. The ritual beat of music brings order to human life. Music is spiritually engaging and amplifies the flourishing of life, while proclaiming hidden tones of meaning which enriches our existence. It enables the evolution of human understanding and liberates us from the restraints of our egocentric cravings.

We humans melt into tears when we hear the soaring sounds of primitive pan pipes. We are lifted into the heavenly realms, when we hear Beethoven’s 5th Symphony. In every arena of life, the arts, collectively, offer a creative doorway into our human soul. The arts exist on the cutting edge of an evolutionary process that pulls us into new and yet unknown futures.

I give thanks for the plenitude of musical and art offerings we have here at Lakeside. They enable our renewal.