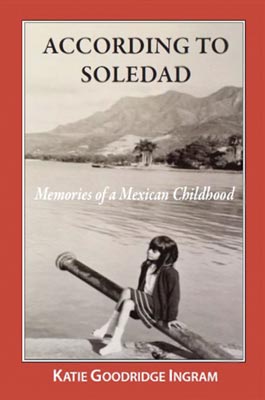 There are two kinds of stories from childhood: those that we are in bondage to, and those that liberate us. This memoir is a combination of both. The author, calling herself “Soledad” in the book, is a young girl born in Mexico to expatriate parents. Her father is a rare-book dealer who has come to Mexico from the US in search of a valuable Aztec codex, a journal from an earlier Spanish missionary, or other unique volumes. Her mother, also an expat, is a designer, and becomes a hostess for famous artists and writers as well as a raconteur in her own right.

Together they create a world in which Soledad is born. They live in Coyoacán, a lush suburb of Mexico City, home to artists, poets, and historians, and even the Russian revolutionary Leon Trotsky. Her parents are often dinner hosts to both Frieda Kahlo and Diego Rivera. Soledad gets to watch José Clemente Orozco work up on a scaffold painting one of his famous murals. She “helps” Anita Brenner write her breathtaking history of the Mexican Revolution, The Wind That Swept Mexico. But that is not the charm of the book; it lies elsewhere.

Like The House on Mango Street by Sandra Cisneros, the narrator of this memoir is very young. So, the book is rich with observations from the perspective of a child, rich in surprising and delightful imagery from the sparkle of the cobblestones after the rain in the streets of Coyoacán to the frightening hiss of the night birds in the trees; from the patting of tortillas on the wood stove to the neon fluorescence of the bougainvillea in February. All say “This is Mexico” in a way that is fresh and new. It is paradise but, much like the biblical one, there is a dark angel hovering nearby.

The father, who is often away on buying trips, has a weakness of the flesh. He finds himself tempted to liaisons with women of the night, some of whom make off with his profits, and one who actually steals a family heirloom. When his extramarital adventures become too much for her, the mother packs her bags and takes Soledad and her two brothers, Primo and Amado, away to Ajijic, a village on the shore of Lake Chapala, the largest freshwater lake in Mexico and home to colorful artists and writers. While this is liberating for the mother, who blossoms there becoming a weaver as well as designing original clothing which she sells in a shop and along the way picking up a second husband, it is less so for Soledad. She misses the father whose memory she clings to. She hates the stepfather (whom she calls “my mother’s husband”) who is something of a misogynist and controlling.

She writes weekly letters to her father in Mexico City full of wonder and lush descriptions of her new home. She writes in the plaza on the round cement bench under the purple jacaranda tree and the yellow primavera. She watches the birds drink out of the fountain and discovers her voice and the power of language. She rides a horse to the edge of the lake and observes “the long-nosed fishing boats with the oarlock made out of the elbow of a branch.” She becomes one of the voices of Ajijic, an artist who will leave her own legacy behind.

Her father dies in a terrible fire that gutted a nightclub in Mexico City. She never got to tell him goodbye. Yet, in this memoir she captures his life and times which still hold her captive to his love, while at the same time using her narrative gift to liberate her own soul and that of the reader.

Michael Hogan is the author of twenty-six books, including Mexican Mornings, The Irish Soldiers of Mexico, and Abraham Lincoln and Mexico. He lives in Guadalajara with the artist Lucinda Mayo and their Dutch Shepherd, Lola.

Title: According to Soledad: Memories of a Mexican childhood.