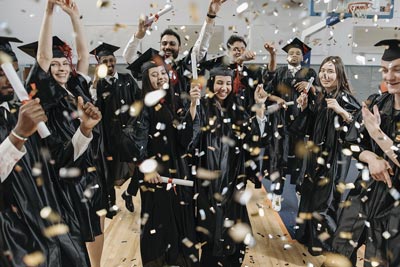 A North Carolina high school student was denied his diploma recently because he draped a Mexican flag over his graduation gown. According to the school principal, doing so was a direct violation of the commencement dress code. She also offered to give the young man his diploma if he were to apologize for breaking the rule and disrupting the ceremony. But he wouldn’t.

Immediate charges of racism were leveled at the principal, school, and school district.

Another Mexican student, however, decorated her mortarboard with a Mexican flag and received her diploma, stifling the charges. That, according to school officials, was because the rules clearly state that only the mortarboard can be altered.

I bring this up because it reminds me of my stuffy commencement ceremony fifty-plus years ago and how the ritual has changed over the years. We didn’t take political stands or make personal statements back then. It wasn’t in our consciousness. Yet. The most daring incident to occur at my graduation involved a student who created a faux middle name, one which he thought was funny, for all his senior year records. “Percival” got the intended laugh from those in the know when it was read aloud as the jokester crossed the stage to accept his diploma. Clueless faculty and officials, of course, wondered what triggered the chuckles.

Several years later I attended another graduation. By now, the do-your-own-thing 1970s were in full swing and expressing one’s individuality and rebelliousness was the norm. A shaggy-haired young man received his diploma, stepped to the top of the ramp leading off the podium, pulled a skateboard from under his graduation gown, and rode back to his seat.

Had that young North Carolinian hidden his Mexican flag under his gown, pulled it out after receiving his diploma, and waved it with the pride he felt, there would have been no controversy and no problems.

Many years after the skateboarder cruised to his seat, after I became a high school special education instructor, attending commencement became an annual tradition for me. Any remnants of the stiff formality of my generation’s graduation ceremonies were gone. Jeans, shorts, and flip-flops replaced dress shoes, black slacks, and conservative dresses. Graduates with Hawaiian or Polynesian heritage wore leis around their necks. Those identifying as LGBTQ added rainbow decorations to their mortarboards. Christians secured crosses to theirs. Recently-arrived African students embellished their caps with reminders of their homeland. Sequined or brightly painted personal messages decorated others.

They followed the rules. Mortarboards could be decorated; gowns could not. They were told this at commencement rehearsal the morning of the ceremony. I know this because I witnessed many rehearsals, assisting my special needs students. And students were told to refrain from “embarrassing your family by unnecessarily drawing attention to yourself or showboating when accepting your diploma.”

At one rehearsal, as the staff member finished his instructions, I turned and found myself facing the boy most likely to showboat that night. Our eyes met.

But before I tell you what happened next, let me tell you something about him.

I had been aware of Josh from his first days as a freshman. He seemed to know every prominent senior and he hung with them. That is unusual because, generally, seniors do not socialize with, let alone acknowledge, freshman. But when I learned Josh’s last name, I understood. His older brother Zach was a popular, athletic senior and, it appeared, that Josh had become the unofficial younger brother of the entire clique.

Josh also ran with many of the male African-American members of his class. It appeared he thought of himself as one of them. He dressed, swaggered, and moved to music like them. He was a wigger, a late Twentieth Century term for a White dude who identified as quasi-Black

His association with both groups—the “cool” seniors and his Black freshman peers—gave him a confidence rarely seen in freshmen. At lunch, he would stride into the Activity Center, full of upper classmen, as if he owned it. In the halls, he raucously careened from one social situation to another. But with his confidence came an unflattering cockiness and arrogance. He came off as a loud attention-seeker. My initial reaction to him was not positive.

By the time Josh was a senior, his wigger days were history and he had become the stereotype good-looking jock who thought he was cooler than he actually was. He was among the movers and shakers in the senior class. But he still had that off-putting attitude. We had brief interactions—”Nice game.” “Great shirt.”—but I’m sure he did not know who I was other than “that special ed dude.” But he was, I must admit, always polite and respectful when we interacted and, as a result, my opinion of him improved.

Perhaps two weeks before he graduated, Josh, I learned from his P.E. teacher, had a disruptive encounter with a girl in the class, a girl who he had known him since elementary school. “You are so conceited and arrogant,” she charged with anger.

The boy’s confrontive demeanor changed instantly, the teacher told me. He stepped back, looked painfully hurt, and tried to defend himself. “How can you say that? You know me.” And he turned and ran out of the gym. The teacher said he looked as if he was on the verge of crying.

A few days later, I had the opportunity to talk with Josh and I purposefully echoed the girl’s sentiments. “I gotta tell you something before you graduate. I have to admit,” I began, “I didn’t like you much when you were a freshman.” Josh looked directly at me. He didn’t nod, but his eyes did. “I thought you were cocky and arrogant. But this year, I’ve figured out that there’s a lot more to you than that. You’re an OK guy.”

He snorted a laugh. “I had a longtime friend tell me I was conceited and arrogant a few weeks ago,” he said. I played dumb. “Of all people. She’s known me for like forever.” He paused. “That hurt.”

“Well, if she said that and I just told you what my first impression of you was, maybe that’s something you could correct in college. When you meet people there,” I suggested, “let them see what’s inside here and here” — and I motioned to his heart and head — “and not just all this.” My hands swirled around his exterior, his muscular façade.

He smiled. “I can’t wait for college.”

So, when our eyes met at the end of commencement rehearsal, I rhetorically asked, “You think he had you in mind when he warned about showboating?”

The young man pulled me into a hug and buried his face in the curve of my neck. His friends stared. He said nothing, but I could hear him think, Finally, someone here gets me.

He didn’t showboat that night.