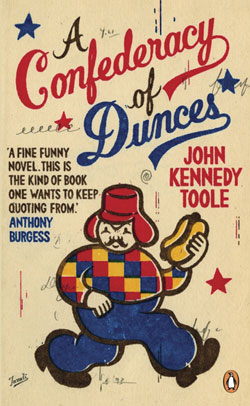 History is replete with vivid (and mostly sad) tales of people whose work became immensely successful too late for them to know about it, but few such stories have a humorous aspect as that involving Mr. O’Toole . . . and for that matter, his mother, as well.

O’Toole was from an old New Orleans family. Born in 1937, he went on to become a highly-regarded college teacher, popular with his students for his highly amusing comments that he often delivered with a mournful expression. During this period, he wrote his first novel, The Neon Bible, the very title of which gave more than a hint of the outrageous mindset of its creator. Unfortunately, the novel failed to find a publisher, causing its author’s spirits to substantially darken.

With time, O’Toole’s morale improved and he wrote a second novel, Confederacy of Dunces, whose main character was called “Ignatius J. Reilly” and whose plot involved little more than the grossly over-weight main character and his equally flabby mother roaming around New Orleans pushing an old shopping cart, looking for whatever they could find. Some have regarded such a meandering plot as a metaphor for Mankind’s eternal search for ...whatever.

Luckily, the two main characters are true originals and more importantly the novel is hysterically funny. Sadly, however, even though it came close to being accepted by one of the best publishers in New York, it was turned down because of its non-existent plot-line. O’Toole thereupon entered into several discussions with the firm’s Editor-in-Chief, who made clear that while he thought the book had signs of genius, it would be difficult if not impossible to market because of its non-existent plot-line. Some few weeks later O’Toole committed suicide. He was thirty-one years old. The year was 1969.

Several years later, the eminent writer Walker Percy, who had won the 1962 National Book Award for Fiction (The Moviegoer) was delivering a lecture about writing at Tulane University in New Orleans when an elderly, pudgy and unkempt-looking woman approached the stage, carrying something wrapped in what looked like brown butcher’s paper.

Cautiously backing away from the lectern, Percy asked the woman how might he help her. Being a Southerner himself, Percy knew better than to be impolite to an old woman, and certainly not in front of a roomful of admiring students.

The old woman replied that if he knew anything about good writing, certainly he could recognize it when he saw it, and with that she plunked her bundle down on the lectern and walked away. Percy tried to call her back but the old lady headed for a side exit and quickly disappeared.

Percy was scheduled to return to New York the next day, but that night in his hotel, he opened up the package—-which contained a tattered copy of Confederacy of Dunces. He had thought to read only a few pages and leave the manuscript with the desk clerk. The old woman, who had left her name and phone number on the first page of the manuscript, could be advised to come and pick it up. She had identified herself as the author’s mother.

However, when Walker Percy left for the airport the following morning, the manuscript was with him, on its way to New York—and as they say, the rest is history. When finally published, the book would win the Pulitzer Prize for Literature, sell more than 1.5 million copies and eventually be translated into eighteen languages—to all of which we say: