The Book Of Will

A Summary by John Ward 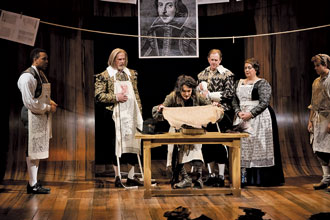 The Book of Will by Lauren Gunderson is a play that is set in 1623, after the tragic death of William Shakespeare. It is an excellent play written by the most produced playwright in the USA today. I was in it. We had to cancel half way through the run due to Covid-19 concerns and, unfortunately, the last four days were to host the biggest audiences.

The play describes the efforts of William Shakespeare’s friends John Hemminges, Henry Condell, their families and to a lesser extent Ben Johnson, poet Laureate of England at the time.

Just as young people go into movie theatres and make illegal copies of films with camcorders, to sell in the markets today, in Shakespeare’s time, young boys would copy the words spoken by actors and unscrupulous printers would print “Quartos” of the plays. These were badly copied and inadequately artistic copies of the plays, which were circulated and performed by hack actors and Shakespeare’s friends realized that his work’s legacy would be lost or thought of as inferior, when they knew that it was some of the most important literature the world had seen.

After witnessing a badly written and performed version of Hamlet, “The King’s Men” players gather at their bar in Stratford-upon-Avon and decry the state of these quartos. Their actor friend Burbage rages about the travesty, but the next day he is found dead. It strikes the other King’s men that if they do not, by means of whatever quartos they can find, whatever original manuscripts are available and their own memories of parts they played, collect Shakespeare’s work into a book, the plays will be lost forever.

With the help of their families and friends they go about trying to find the plays of William Shakespeare, only to learn that the lion’s share of them were lost in a theatre fire which caught from the cannons in Shakespeare’s Henry Vlll.

As time goes on they do find actor’s sides, play snippets found in privies, originals kept by theatre fans and when they assemble what they have, and supplement the lines with their own recollections of them, they are then tasked with finding a printer and the funds to print the book, referred to as the “Folio.”

They get Ben Johnson to write a Preface to the book, which he is reluctant to do, having been a rival of Shakespeare and in constant physical and artistic fights with him. Johnson’s aversion to anything Shakespeare writes is quickly replaced with awe when he reads some of the newly recomposed works Hemminges and Condell have put together and realizes the true genius of the man.

Unfortunately they are rejected by every printer on Fleet Street, but for the one they hate and who Shakespeare hated the most, a man called William Jaggard. After much soul-searching and against Henry Condell’s better judgment, they agree to let Jaggard be the printer and he hands it to his son Isaac Jaggard who truly understands the importance of the project.

Of course raising the funds to print the First Folio is complicated and involves going to mistresses and some aristocrats for support, but in the end they produce the First Folio of the collected works of William Shakespeare, of which, I am proud to say, I have a copy.

Regarding the local production, oddly enough, despite months of rehearsals, the backstage atmosphere was harmonious and mutually supportive, more than in any play I have ever experienced. Petty insecurities and jealousy was nowhere to be seen. With Lynn Phelan at the helm as Director, rehearsals went smoothly and everyone, from experienced actors to those who were new to the boards, learned, grew and interpreted their parts with aplomb.

Ken Yawkichuk, who played John Hemminges, Ted Fahey, who played Henry Condell and Johanna Labadie who played Hemminges’ daughter Alice, had the most lines and no-one envied the amount of work they had to put into their roles. The others played multiple parts so that twelve actors portrayed around thirty characters, which is the intent of the playwright. Personally, I played seven characters.

We are devastated that we could not continue the play for the last four days, because it is certainly one of the best plays to be staged Lakeside. Bravo Theatre and Jayme Littlejohn should be commended for putting the play on and bringing so much culture to the community. There has been talk of restaging it in the fall if this plague has passed and we can gather again. Cross your fingers.