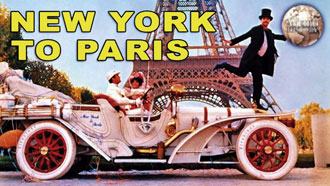 “It’s just a publicity stunt. The car will never even make it to Chicago, let alone the West Coast.”

Such was the ridicule that greeted the Thomas Flyer’s entry into the Great Auto Race of 1908. Five cars entering the race were specially designed for this grueling event. Germany had one entry; Italy, one; and France, three. The sixth entry, the Thomas Flyer was taken off the showroom floor in New York, just six days before the race. Only a spotlight was added.

Co-sponsored by the Paris newspaper, Le Matin, and the New York Times, the race, starting in New York, pushing west across the United States to Alaska and crossing the Bering Strait into Manchuria, traversing the Siberian wastelands, Eastern Europe and finishing 22,000 miles later in Paris, was intended to prove the superiority of French-built cars.

Ignoring the objections of more experienced explorers, Georges St. Chaffray, the organizer of the race, insisted that the race begin in winter, so that the frozen Bering Strait could be traversed by car from Alaska to Siberia.

On February 12, 1908, amid a Times Square crowd of more than 250,000 hardy souls, the race began. The first entry, the French Sizaire – Naudina, a fragile 3000-pound 15 horsepower machine, dropped out less than 100 miles from New York City with a broken drive shaft. The other five cars pushed through New York, Ohio and Indiana to Chicago suffering though record winter storms, high winds and temperatures of 26 below zero.

The Thomas arrived in Chicago first, with the Zustand the DeDion, both French cars, one day later. The German Protos and the Italian Moto Bloc were three days behind. After Chicago, the snow turned to mud—deep mud that nearly swallowed the car, and almost drowned crew member George Schuster, the chief mechanic for the Thomas Flyer, and the only crew member who was to endure the entire race. Undaunted, they pushed on, arriving in San Francisco more than 14 days before the second, the Protos. But now there were only four cars. Half-way across Iowa, another French car, a 6,400 pound 30-horse power Moto-Bloc dropped out because the driver Marcel Goddard found “the hardships too severe.”

On March 27, the Thomas now 16 days ahead of all others went on to Seattle and, according to rules, embarked by boat for Valdez, Alaska. In spite of severe weather and high winds, all 787 of the inhabitants of Valdez were on hand at the dock to witness the arrival of the first car ever in Valdez. After just a few hours in the Alaska wilderness by dogsled, Schuster informed the race officials that no car could make it through Alaska, let alone the Bering Strait, which now had thawed to mushy ice floes—so back to San Francisco.

Because of the race route change and the ferrying of the German car by railroad in violation of the rules, the American team was awarded a 30-day credit. It was now off by sail to Japan, across Japan by car, and on to Vladivostok.

By the time the race reached Vladivostok, only the Thomas and the German Protos remained as contenders. The final French entry, the De Dion, had dropped out after crossing Japan, and the Italian Zust, a 3500-pound 4-cylinder 30 horse power machine, was more than six weeks behind. Now the race was on--- a battle of survival, ingenuity and just plain guts.

On May 22, the Flyer left Vladivostok. The car and crew continued to struggle through endless stretches of mud, sunken logs and pools of water as deep as the car. Twice, the Flyer hit boulders sunken in the mud, causing it to somersault and hurl the crew out of the car. By now the Flyer was slumping on sagging springs with a seven-inch crack in its transmission case and six broken teeth off its driving gear. That both the car and crew could still be expected to continue on to Paris, another 9,000 miles, was unfathomable. But with Schuster, now as team leader, they pushed on.

The steppes of Manchuria were teeming with brigands who would gladly kill for clothing, let alone something as exotic as a car. George Mac Adams, a correspondent for the New York Times who accompanied the crew for a short time, wrote, “I sat with a rifle staring into the dark beyond the small circle of light cast by the campfire. There were bandits out there somewhere, ruthless Manchurian marauders known as ‘red beards,’ who hoped to capture rich foreigners and hold them for ransom. A tiger had been shot only fifty miles away, and the unnerving sound of howling wolves only increased my loneliness and fear.”

In a ferry crossing in a Russian River, the boat sank and the Flyer had to be dragged out from under the water by eight draft horses. Another five days were lost when Russian locals, unable to speak English, gave the Americans wrong directions.

The incredible tribulations, the lack of food, gasoline and shelter severely tested the mettle of both the Thomas crew and the Germans. But even in the throes of such competition, at times civility emerged. In Manchuria, instead of overtaking the Germans, Schuster stopped to pull the German Protos out of a waist-high mud pool. The German driver, Hans Koeppen, then popped open a bottle of champagne and toasted their American fellowship and sportsmanship. The Germans occasionally shared food and water with the Americans, acknowledging their mutual respect for those facing ordeals already conquered and those to be encountered. But they drew the line at sharing gasoline.

On July 23, the Flyer crew arrived in St. Petersburg. Rather than resting, Schuster continued toward Berlin ignoring the protestations from the exhausted crew. Near Berlin the car hit a large bird, shattering the right headlight. “It was minor compared to all other problems, but almost proved to be our downfall,” Schuster later reported.

On July 27, the German Protos reached the French capital. But, the Americans, not far behind, and graced with the 30-day credit were actually in the lead and the anticipated winners. As they approached, Paris, a local gendarme, refused to allow the car to enter the city limits because it violated traffic laws requiring all motor vehicles to have two headlights. A young French spectator, however, came to the rescue when he offered his bicycle with a headlight to the crew. Schuster strapped the bike to the front of the car and the policeman relented. The Flyer arrived in Paris at 8:00 p.m. on July 30, to a cheering crowd of over 50,000, the clear victor by 26 days.

The race covered almost 22,000 miles of sheer hardship endured for 167 days. The Thomas Flyer, at 5700 pounds with a 571 cubic inch, 60 –horse power motor, had proved to the world that just a plain American car and a crew with the right stuff could achieve the near impossible. Today, it is on display in Reno, Nevada, at Harrah’s Auto Collection, a tangible tribute to the courage of the men who won the greatest automobile race in history.