By Mark Sconce
This email address is being protected from spambots. You need JavaScript enabled to view it. 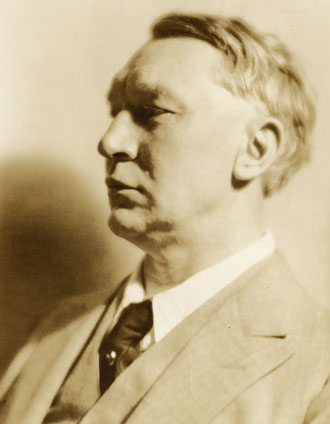 Twilight is the ideal time to visit the Oak Ridge Cemetery here in Springfield, Illinois. You can still see the tombstones even as an evening haze settles in, some would say a ghostly haze. Over there is the most prominent monument in the cemetery, and you instinctively know whom it memorializes when you recall the prairie-lawyer who once split rails in this neck of the woods. Just a stone’s throw from his commanding presence is a less-noticed headstone that simply says Nicholas Vachel Lindsay 1879-1931 Poet. In truth, a prairie poet, who wrote this about Abraham Lincoln.

It is portentous, and a thing of state

That here at midnight, in our little town

A mourning figure walks, and will not rest,

Near the old court-house pacing up and down.

A bronzed, lank man! His suit of ancient black,

Make him the quaint great figure that men love,

The prairie-lawyer, master of us all.

His head is bowed. He thinks on men and kings.

Yea, when the sick world cries, how can he sleep?

Too many peasants fight, they know not why,

Too many homesteads in black terror weep.

The sins of all the war-lords burn his heart.

He sees the dreadnoughts scouring every main.

He carries on his shawl-wrapped shoulders now

The bitterness, the folly and the pain.

But becoming a poet, not to mention a wandering troubadour, wasn’t exactly what his parents had in mind when they sent junior off to pre-medical school where, after three years, he quit. He convinced his parents to underwrite a program at the Chicago Art Institute and, later, the New York School of Art where an instructor suggested he would make a better poet than painter. Vachel managed to sell several poems to a New York magazine, but not enough. He decided to take his art and poetry to the highways and byways of the country “bringing hope to the common people” through his art and poetry. He would support himself by trading poems and pamphlets for food and shelter.

Thus began one of the most remarkable literary journeys in American history. He set himself the task of reaching as many people as possible through poetry and art. From Florida through Georgia, North Carolina, Tennessee and Kentucky “afoot and penniless,” he sometimes had to beg door-to-door just to survive. The 600-mile journey was no cakewalk: “No one cared for my pictures, no one cared for my verse, and I turned beggar in sheer desperation.” Yet he made it in just three months, unscathed, and felt rather proud of his effort.

Forever restless and mission-driven, Vachel once again took to the road in 1908 to walk from New York through New Jersey, Pennsylvania, Ohio and Indiana and on to Springfield. This time, however, he gave public and private lectures in high schools, dance studios or club meetings—auditoriums were filled for him. They came as much for the performance as the poetry. He also met Harriet Monroe of Chicago, a patron of the arts and founder of Poetry, who decided to publish one of his submissions: General William Booth Enters Into Heaven.“ To Be Sung to the tune of The Blood of the Lamb.” William Booth was the founder and first General of The Salvation Army, and one of Vachel’s heroes. Marginal notes for the poem include “Bass drums beaten loudly,” “ Banjos,” “Sweet flute music,” “Tambourines to the foreground.”

Big-voiced lasses made their banjos bang,

Tranced, fanatical they shrieked and sang:—

“Are you washed in the blood of the Lamb?”

It was an instant hit and heralded a new and exciting career for one who believed in home-towns, rural values, and “the uncommon qualities in the common man.” His success continued with the 1914 publication of The Congo: A Study of the Negro Race. It was the poem most requested and most remembered, and audiences often chanted along with Vachel when it came to the chorus:

Mumbo-Jumbo will hoo-doo you.

THEN I SAW THE CONGO, CREEPING THROUGH THE BLACK,

CUTTING THROUGH THE FOREST WITH A GOLDEN TRACK.

Volumes of his poetry were published and selling well. Lecture tours were organized by his new wife, Elizabeth, whom he met in Spokane, Washington where he lived for four years both as a celebrity and a working poet. She was a twenty-three-year-old teacher half his age and, as a married woman, by law, she could no longer teach school. Thus, she became dependent on Vachel’s boom-or-bust livelihood. Desperate for money, he undertook an exhausting six-month tour of lectures and recitals that wouldn’t have paid the rent had it not been for his wife’s careful management and the lifetime achievement award he received from The Poetry Foundation of $500 or about $7,500 today. He paid his bills and moved the family back to Springfield.

Finally, the prairie troubadour’s depression took a fatal and painful turn in 1931. He was fifty-two when he drank the bottle of Lysol that killed him. His last words were: “They tried to get me; I got them first!” One might say he died from paranoia. Vachel Lindsay’s most important contributions were his commitment to poetry as a performance art at a time when poetry was becoming more and more “an artifact of the printed page.” Then, too, his celebration of the village in a century when most of American culture turned more and more toward the teeming urban centers. Even so, few poets in their lifetime become as widely known as Vachel Lindsay. Over a million people heard or witnessed his work during his lifetime.