Mexico’s Lord Of The Waters 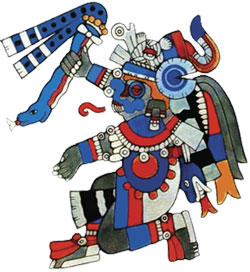 The current state of Lake Chapala is merely a phase in nature’s continuing cycle of the lake’s rise and fall. But according to an elderly Mexican friend, the state of the lake is more likely the work of the ancient Aztec rain god, Tlaloc.

“It’s simple,” he told me with a sly wink. “When Tlaloc is pleased, he makes it rain just enough for crops to flourish. When he’s upset about something, you get either a drought or a flood.”
Just who was this pre-Columbian rain-maker? Actually, the “lord of the waters” pre-dates the Aztecs, appearing in Meso-American mythology as early as the Olmec civilization. He was called Chac by the Mayas, Tajin by the Totonacs and other names by succeeding cultures. Regardless of the name, this deity was venerated by most early Mexicans as one of the four principle gods—those of earth, sun, rain and corn.

One of his earliest depictions is among the archeological ruins of Teotihuacan where wall paintings show the god in his part of the heavens surrounded by priests and the happy souls of the departed.
Much later, the Aztecs erected a great temple devoted to him in the capital, Teotihuacan. Tlaloc was responsible for providing just the right amount of rain to grow crops—primarily maize, the primary food source of the ancients. He caused all plant life to flourish, bloom and bear fruit. He made the rivers flow and the lakes thrive, thus assuring a plentiful supply of fish and game.

But could this rain-making prowess extend into the twenty-first century? “Well,” recalled my friend, “he certainly caused a stir back in ’64, don’t you remember?”

That year I was studying at the University in Mexico City where my friend was teaching. In the early months of the year, as the new National Museum of Anthropology neared completion, it was decided that the monolith of Tlaloc was just the right finishing touch to accent the entrance of the impressive structure.

Up to then, the stone colossus lay half-buried in the nearby valley of Coatlinchan, sporadically visited by the curious. It was generally thought to be the most massive piece of sculpture produced by any ancient Mexican culture. And moving the 167-ton statue into the city required a super-human engineering feat.

For starters, the road bed along the route had to be reinforced in order to bear the weight. Then a special moving platform was constructed with a total of 72 wheels. The massive creature had to be chained like Gulliver in order for a custom-built steel crane to lift it and place it onto the platform. The final move, which took place over several days, was accompanied by police and fire vehicles and rain-soaked cheering crowds. Rain-soaked? And how!

It seems that Tlaloc was not amused at being uprooted from his century’s old habitat. The first day of the move was accompanied by unusually early and heavy rains throughout the Valley of Mexico. Each day of the move brought increasingly severe downpours, ultimately flooding large areas of the Capital. The city’s fascination with the move and the accompanying deluge was reflected by the press.

“They move Tlaloc and the Capital is flooded,” screamed the headline of one leading daily. The final day of the move saw the most violent weather yet, punctuated by hail which ripped apart trees and damaged buildings.

Finally, the day after the move was completed and Tlaloc was once again at rest, the weather changed abruptly to a series of clear, sunny days with gentle rainfall at night—just enough to make the crops flourish.

So, were these events caused by Tlaloc, as the news media seemed to imply? Or were they merely coincidence? As my friend mused, “It’s like the case of Lake Chapala. You choose the answer that suits you best.”