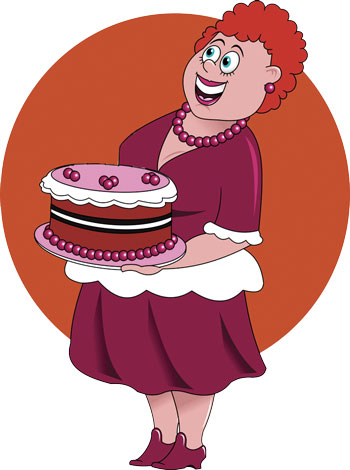 Ted kept his gate well tended. Whenever the paint got a little sad looking, he was out there putting on a new coat. If it was dirty, he had the hose at the ready and a bucket of soapy water. And the plants outside the gate? They were always lovely. They were in a cluster of marine-blue pots of various sizes and shapes, short, tall, square, round. He had some well-chosen perennials in them, such as lavender and bee balm, but he supplemented them seasonally with other things. There were noche buena plants at Christmas time and pink impatiens in the spring.

Ted was a fixture in the neighborhood, out tending his plants or washing his gate, his big brown mutt, Buddy, usually lying on the sidewalk watching him. The neighbors never saw Ted’s wife, though. If asked, they would say, “Ted lives in the house with the yellow gate and all the nice plants. With his alleged wife.” They always said “alleged wife” as if it had quotes around it, or sometimes they said “imaginary wife.” Ted talked about his wife occasionally but always in a vague sense. People asked him how she was, knowing he was married. And he’d say, “Pretty good” or “Fine, thanks for asking.”

Anne accepted it as her mission to find out about Ted’s wife. And to meet her. She had lived in the house across the street for 17 years, much longer than Ted. At first, she tried inviting them to neighborhood potlucks or happy hours at her house. She liked to entertain on her spacious flagstone patio, guests clinking wineglasses around the central fountain and admiring her roses. Ted would sometimes come to the party, bringing cheese and crackers if it was a potluck and a bottle of chilled Pinot Grigio. He’d happily talk to folks, mostly about gardening or art galleries or tips for newbies about where to shop and who sold the best papayas. When asked about his wife, he’d simply say that she wasn’t able to come this time.

When repeated invitations failed, Anne tried another tactic. Unlike most of the gringos on her block, Anne spoke decent Spanish. She decided to talk to Ted’s cleaning lady, who she saw go in and out once a week. She started by just saying hello, introducing herself, asking the lady her name and how she was. The cleaning lady was named Ana, which pleased Anne and prompted her to say “tocaya,” pointing out they had the same name. That was always a way to make an instant friend. Finally, Anne asked after Ted and his wife. They were bien, Ana said. When Anne tried more questions about the wife, Ana clammed up, feigning that she couldn’t understand Anne’s Spanish, shaking her head, and excusing herself.

This presented a problem, as Anne prided herself on knowing all of her neighbors. And, more importantly, knowing all of the local gossip. She, Karen, and Virginia had been speculating about Ted’s wife ever since the couple moved in. They saw her on moving day, helping Ted and two other men carry cartons. But as far as Anne knew, that was the last time anyone on the street had seen her. It just wasn’t fair that the woman remain a mystery. Was she an invalid? Agoraphobic? A gringa who was afraid that drug cartels lurked around every corner? Or had Ted killed her and disposed of the body?

After a time, Anne decided on the direct approach. “I’d really love to meet your wife, Ted. We have a ladies group she might like to join.”

“Thanks, but Cindy isn’t much of a joiner,” he said. “Kind of a homebody.” Ted turned back to his plants, Buddy looking up at Anne with curious eyes, thumping his tail. Anne smiled. Cindy! Now she knew the alleged wife’s name. This was progress.

“Sure, I’ll ask her,” he replied, but he didn’t turn back from his plants. “Though the brioche is a no-go. Cindy’s gluten-free.”

Her name AND her food allergies. Anne was getting somewhere. She made her tone extra perky and said, “I do a great gluten -ree almond cake, too. So moist.”

“Yes, yes,” Ted muttered, and she could tell she’d overstayed her welcome there at his gate. Using her cane, she picked her way across the cobblestone lane and opened her own gate, dirty and in need of some touch-up paint.

She would bake the almond cake and bring it over. They’d have to invite her in then. She’d get in that gate one way or another and find out about this alleged wife Cindy, the gluten-free homebody.

Ann enacted her plan the following Saturday, a day that Ted could reliably be found tending his plants. As soon as she spied him and Buddy that morning, she ventured across the street carrying her gluten-free offering on a cheerful red platter.

“Ted,” she called out as she was walking across, carefully watching her feet and her cane. “I’ve brought my almond cake for Cindy.”

Ted turned, hose in hand. The water splashed at her feet, startling her. As she stumbled and tried to catch herself, the platter with the cake fell onto the cobblestones. Anne braced herself with the cane, but the cake was a total loss.  Buddy leapt up to devour it.

Ted quickly shut off the hose and shouted, “Oh no! Are you okay?”

Just then, the gate opened a bit and a woman in a brightly colored caftan peered out. “Ted, what happened? I heard a crash.”

A huge smile came to Anne’s face as she walked toward the gate, her hand outstretched. “Hi, I’m Anne,” she said. “I was just bringing you a cake.”