The Resilience of Our Mexican Friends

From the Ojo Archives

[Ed. Note: With all the natural disasters occurring worldwide, and especially in Canada the USA and Mexico, I thought it to be appropriate to revisit this story.] 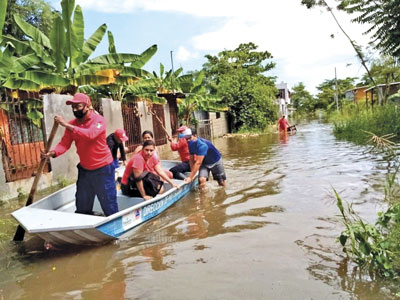 Friends from San Ignacio had stopped by for tea. Fifteen minutes later the torrential downpour started, and now two hours later I’m writing this with my bare feet in a puddle of water, listening to the sounds of drumming and chanting floating in my window from my neighbors across the street. My friends had left hurriedly, as I did my best to sop up the water blowing in through the windows and trickling steadily down the walls. When the downpour had subsided, I heard activity and happy, carefree singing in the street; those who had been forced to seek shelter were now making their way home.

For many Mexicans the events of the last couple weeks have not been disastrous or life changing; rather they view these natural occurrences as nothing more than an inconvenience. The Mexican people accept natural disasters as a normal part of life, and adjust to the change in rhythm as needed.

I asked a friend who lives near a stream in San Ignacio if she had had a problem with flooding. No, she replied calmly, “but the hillside came down on our house.” The damage was significant and she’s talking about it in the same tone of voice she’d use to talk about the price of rice in the local market.

A neighbor told me he couldn’t find his dog, but he heard he had been seen in San Ignacio. There was no bus service, there were landslides, people were staying off the roads, and so he walked there in the rain. He found his dog, then walked all the way back, joyful that he had located his pet, full of gratitude and without one word of complaint.

Now you take the Taquería Cheos. This has to be a prime example of never giving in and never giving up. A good part of the kitchen remains intact, so they moved a few of their red tables across the street outside the car rental business next to a computer place, and they go back and forth to the kitchen, serving their customers. Open for business, no problem.

I observed people crossing the bridge in the first few days when the river was still raging just a few feet beneath the broken cement. Young women carrying infants of a few weeks crossed two thin boards to get across without missing a beat. Small children played near the edge, their bikes teetering precariously.

Emily Carr, the Canadian artist and writer who spent so much time with the indigenous people of the Pacific west coast, comments on this non-combative harmony with nature in contrast to her own frustration in her book, Klee Wyck, published in 1941. “I’ve learned to defy the element’s meanness towards my canopy, materials, temperament. Indian people and the elements give and take like brothers, accommodating themselves to each others’ ways without complaint. Indians are comfortable everywhere.”

When I asked a Mexican friend why he had waded across the river that day when the water was waist high and the current still so strong as it roared to the ocean, he replied, “Because I was in a hurry to get to the other side. You do what you have to do.”