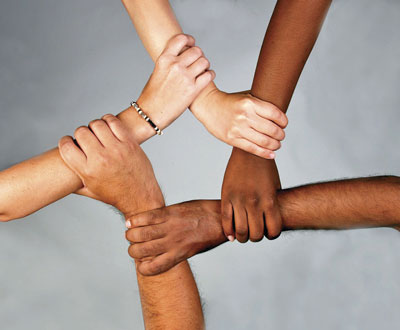 With so much divisiveness and national animosity saturating the airwaves, press and political arenas of the United States over the issue of ‘Race’ that it would be well to discuss what we mean by the word ‘race’.

First, science has proved through world-wide DNA genetic tracking through the ‘female’ line that there is no scientific or genetic basis for ‘race’. What we do find is largely made up label used by all of us both unconsciously and consciously on some form or another to define and separate ‘US’ from ‘THEM’. Over the past decades genetic research has revealed two deep truths about people. The first is that all peoples are closely related, even though there are many more humans around today. Everyone on the planet has the same collection of genes, but with the exception of identical twins, everyone has slightly different versions of some of them. The second deep truth is very hard for some of us white Caucasians to swallow.

In fact, it is probably the most shocking revelation most of us will ever have to face and that is that ALL people alive today have their ‘origins; from Africa. Our species, Homo Sapiens evolved from Africa. Our original primeval genetic mother could have very easily have been a bright ebony skin-colored beauty.

No one is exactly sure of the exact time or place but our primeval mother could have been our primeval ancestor from one of todays several ancient tribes of Africa like the Hadza hunter-gatherers of Tanzania, the Khe San of South Africa or the Pygmies who spent tens of thousands of years separated from one another even before human emigrated out of Africa.

DNA is often thought of as a ‘text’ with these 4 letters standing for chemical bases: A for adenine, C for Cystocine, G for Guanine, and T for Thymine.

Over the 300,000 years or so we humans have been around there have been numerous small teaks to our DNA which have made us who we are, including the impact of both the environment and culture. Genetic research has shown that our Genome consists of 3 billion base pairs - page after page of ‘A’s,’ C’s, ‘G’s and ‘T’’s which are roughly divided into 20,000 genes. What genetics has shown is that ‘mixture’ and ‘displacement’ has happened again and again over thousands of years and that our human ‘mythical’ pictures of ‘racial’ structures are almost always wrong - myths that have accumulated over generations from faulty thinking resulting in the present increasingly dangerous paradigm of ‘US and ‘THEM’.

In the first half of the 20th Century, a prominent scientist from Philadelphia named Morton spent his whole life collecting human skulls. From his studies on skulls, Morton divided the people on the planet into groups based on the configuration of their skulls. Morton called his science ‘Craniometry’ He determined that ‘whites’ or ‘Caucasians’ were the most intelligent of the races. Today, Morton is known as the father of ‘Scientific Racism’. When he died in 1851 the Charleston Medical Journal in South Carolina praised him for “giving to the negro his true position as ‘inferior’ race”. So many of the horrors of the past two centuries can be traced to the idea that one race is inferior to another.

To an unforgettable degree, we still live today with Morton’s legacy. Racial distinctions continue to shape our politics, our neighborhoods, and even our sense of self.

The ceremony at the White House in 2000 celebrated the unraveling of the Human Genome evoked this statement from Craig Ventnor, a pioneer of DNS sequencing,....”The concept of ‘race’ has no genetic or scientific basis.”

With the present incumbent of the White House and many of his selected cabinet members showing increasing disturbing and dangerous signs and symptoms of ‘mythical’ racial profiling one can only hope and pray that in the best interests of the United States and the world at large they will remove their racial blind spots and learn quickly what the sciences have been teaching for decades, that the word ‘race’ is decadent in the lexicon of life and is only a dangerous expression of our own mental ‘myths’ and selfish fantasies of  ‘THEM’.