EXISTENTIAL DREAD— and the Quest for Meaning 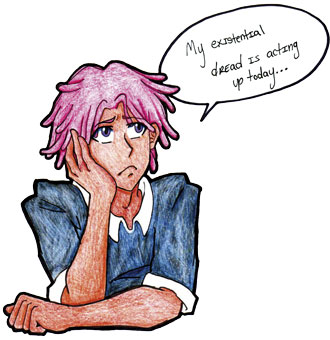 The first photos taken of the earth from outer space would seem to have diminished man’s sense of importance. Earthsky News recently published a photo taken of the earth by the Voyager I spacecraft from 3.7 billion miles out in the solar system. I struggled to even locate our island home, a tiny blue/green dot lost in a sea of nothingness. Voyager I is now 11 billion miles away, a distance from which the earth cannot be seen at all.

I have never been able to wrap my mind around the concept of either an infinite or a finite universe, the latter presumption leaving unanswered the question of what would lie beyond a limited cosmos. It is a given, though, that our earth, that all we are or ever have been, that the entire human story, the story of our planet itself, equals only a miniscule grain of dust, so insignificant as to practically not exist at all.

Neither can I comprehend the phenomenon of time. Time does not exist for some cultures, like the Hopi people of northern Arizona, but if we accept it as reality, then it extends forward and backward into all eternity. Our lives, the life of our entire solar system, perhaps of all that has ever existed or ever will exist may then amount to less than the blink of an eye.

The temptation to throw up one’s hands in despair at such realities is a huge one for many, to conclude as Shakespeare’s MacBeth does:

Life is but a walking shadow,

That struts and frets his hour upon the stage

And then is heard no more. It is a tale

Told by an idiot, full of sound and fury,

In his wilderness memoir Deep Woods, Wild Waters, Douglas Wood describes the panicked response to this reality as existential dread, a fear of being alone, lost, insignificant, adrift in an indifferent universe.

On a starry night many years ago, I stood alone on a bluff in a northern wilderness, as the waves of an inland sea turned to silver and Jupiter cast a ray of light across the watery reaches, and repeated the age old question posed by the Psalmist, “What a thing is man that thou art mindful of him, and the son of man that thou dost care for him?”

No celestial response reverberated among the cedars and hemlocks in response to my query, but I experienced a strange sort of peace by simply asking the question. The star spangled vastness inspired not dread but a sense of awe and, strange as it may seem, thankfulness.

When I was very young, two or three years old, I would lie on the grass and wonder at the blue skies of summer overhead, imagining them to be a sort of thin ceiling, pondering what might lie beyond it. Mine was a small boy’s world, finite and secure, a comfort zone tucked away from the ravages of World War II, ongoing at the time.

My grandfather, a small subsistence farmer with only the rudiments of formal education, imagined our world to be flat, because the Bible speaks of the four corners of the earth. My father’s generation saw their universe expand to include human footsteps on the moon and unmanned vehicles exploring the Martian landscape. My generation’s cosmos extends forever into time and space.

What is the meaning of man’s existence, suspended as he is on his dust mite somewhere among infinite wastes? Do his efforts have any import at all, or, as the ancient writer known only as Qoheleth says, are they all vanity and a chasing after wind? That is the essential question. Qoheleth says in so many words that meaning cannot be ascertained through reason but that life is worth living anyhow, that one should accept reality, what good things come to him, and enjoy his time here.

One can seek to flee from reality through religion, but, as Rabbi Jonathan Sacks tells us, the Abrahamic faiths—Judaism, Christianity, Islam—while sometimes serving as opiates, are more often vehicles of protest, of one shaking one’s fist at heaven and asking, as some old folks in Chaim Potok’s novels do, “Master of the Universe, what can you be thinking?”

There will be those who conclude that there is no meaning, that what is simply is, and that is that. All that is or was or ever will be is a consequence of a gigantic cosmic accident, a miniscule burp within incomprehensible infinity.

If good and evil exist and if evil is made manifest through cruelty and injustice, then it would seem that we are compelled to stand in opposition to such dark forces. To the extent that we practice kindness, generosity, justice, we contribute to the moral edification of the universe of which we are a part. To the extent that we do not, we contribute to the contamination of that whole.

Dr. Loren Eiseley’s essay “The Star Thrower,” from his book The Unexpected Universe, has been retold in various forms many times over the years. Eiseley was walking a tropical beach when he observed groups of people picking up stranded shellfish and boiling them alive in order to add the shells to their collections. Some distance away he observed, in stark contrast, a lone man methodically flinging beached starfish back into their watery homes. When asked about this activity, the man answered that he only collected “the living”. What difference could the kindly Star Thrower’s actions make on a beach covered with stranded starfish, where acts of cruelty were taking place all around him at the same time.

According to one version of the story, The Star Thrower responded, as he prepared to return yet another specimen to the sea, “It matters to this one.” Perhaps man’s ethical decisions have larger consequences than his minute state of physical being within the cosmos would seem to imply. Everything we do or fail to do matters to someone. Whether the sufferer is a stranded starfish, a wild elephant pursued by a poacher, or a fellow human victimized by illness or persecution, neutrality is not an option.

I leave it to greater minds, such as the recently departed Stephen Hawking, to explain the mechanisms of the universe. One errs when one turns to religion—any religion—for scientific explanations. Neither can science provide answers tothe eternal question, “What is the meaning of it all?”