Only Once In A Lifetime

A Novel by Alejandro Grattan-Dominguez
Reviewed by Carol L. Bowman 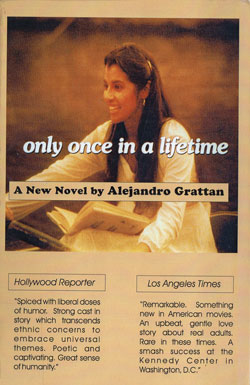 Only an exceptional screenwriter, one who wrote, directed, and co-produced a major Hollywood motion picture, could take that movie and more than twenty years later turn it into a thought-provoking novel. That writer/director happens to be Alejandro Grattan-Dominguez, editor of El Ojo Del Lago for the past 23 years.

Hitting a low point in his Hollywood career, Alejandro had the idea for a fresh movie script while spending homeless nights in a barber’s chair at a friend’s shop. Having no paper with him, he began to scribble the story on the back of a political flyer—and that was the birth of Only Once in a Lifetime. The screenplay centered on cultural snares that Mexican immigrants face when trying to assimilate into the American fabric and a humorous look at the human response to tragedy and despair.

After a year of writing, a string of production and casting disasters, followed by improbable miracles, Grattan provided the movie industry with the first full-length film depicting the Mexican-American experience and the first American-made film that featured a nearly-all Hispanic cast and crew. However, for all the parameters to come together at the precise time to bring this movie from premise to production to premiere could really happen ‘only once in a lifetime.’

At its national debut in Texas, the film received “thunderous applause and a standing ovation” according to San Antonio’s Express News. The Los Angeles Times called it “Remarkable . . . something new in American movies.” The Hollywood Reporter said … “It transcends ethnic concerns to embrace universal dilemmas.” No more barbershop chairs for Grattan-Dominguez. He now had an executive office and public acclaim.

Standing ovations also followed screenings at the Motion Picture Academy Theater in Beverly Hills and most importantly at the premier at the Kennedy Center Honors Ceremony in Washington, D.C. Due to the film’s acclaim, it was selected to be among three films to represent the United States at France’s prestigious Deauville Film Festival. Much more recently, a fund-raiser showing of the film at Cinemas del Lago in Ajijic benefited the local children’s program, Los Niños Incapacitados.

So what propelled Grattan-Dominguez to dust off the characters in his movie and give them new life on the pages of a novel? What in his past nagged at him to explore the challenges Mexican immigrants to the US encounter and the difficulties that confront the human spirit? What encouraged him to do the reverse of the expected in Hollywood; to enhance his original script into a novel, instead of the customary journey of a book’s adaptation into a screenplay? I sat down with him to uncover some answers between the pages.

After moving to Ajijic, Mexico in 1987, Alejandro often reflected on the relevancy of the original movie plot. The culture of his adopted homeland and his own background of an Irish father and a Mexican mother encouraged him to expand the story.

To enrich character development, the book’s author added a detailed look into the early life of “Francisco Obregon,” the story’s protagonist. The tale now begins in Ajijic, Mexico in early 1940, where a visiting Hollywood screenwriter and his wife become enamored with the antics of a 10-year-old street urchin. The homeless boy displays an artistic ability to draw sketches and a mesmerizing innocence. “Adrian Grant” and his wife eventually formulate a plan to become benefactors for the lad.

Grattan reminisced about just such a waif whom he had metat Rosarita Beach in Ensenada, Mexico. “I remembered that Mexican boy and decided to use him as a model for the boy that my movie character might have been.” When writing the book, he wrote a composite of actual interactions with this charming kid to help the reader understand the inner character of “Francisco.” The book and the movie start to parallel when “Francisco,” as a young adult, artist and his beloved bride head to Los Angeles, a dream “Adrian Grant” always had for the boy.

As the story progresses, Francisco’s life in the US collapses because of several personal tragedies. His paintings begin to reflect despair and melancholy. He struggles through the realities of US bureaucratic quagmires. Finally, he questions the very meaning and worth of his life. Then, an amazing turn of events brings the reader directly into Francisco’s chaos. The book is a page-turner to the very last page. There’s also another touching aspect: pet lovers beware—you will be hooked.

Having read all seven novels written by Grattan-Dominguez, hints about the his background, family, fascinating experiences, love of animals and his wild ride through the American film industry are woven into the pages of each story. Only Once in a Lifetime is no exception.

The movie itself can be seen, along with another Grattan film, No Return Address, on Turner Classic Movies. The novel Only Once in a Lifetime is now available on Amazon.com, paperback $7.95 or Kindle version, $4.11.

Only Cover Story
Only Cover Story   April 2022 Slaying The Deer Slayers In Mexico: The Yaqui Experience By Hayes Raitt March 2022 Where is Little Martin? By 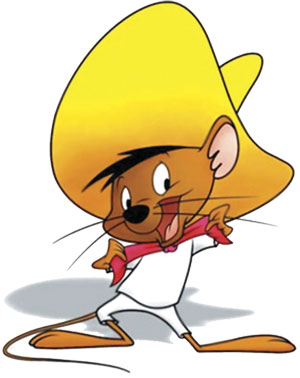 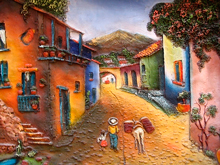 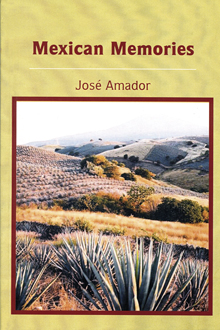