The Irish Soldiers Of Mexico 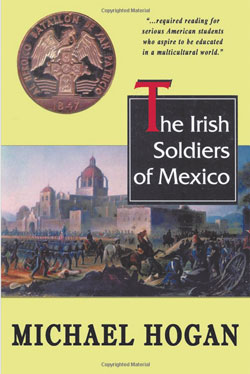 At long last—a book that treats the tragic story of Irish soldiers who deserted to the enemy during the Mexican-American War as neither hagiographic soap opera (brave Catholic soldiers aiding an embattled Catholic nation) nor a Manifest Destiny morality play (traitors getting their just desserts).

Forming what they called the Battalon de San Patricio (St. Patrick’s Battalion), these 260 men became popularly known as San Patricios. What author Michael Hogan brings to this embarrassing episode in our history is scholarship.

This is hardly surprising. Hogan is the author of eight books, one of them the, highly-regarded Making Your Own Rules. A member of the Organization of American Historians, he is also a consultant to the Advanced Placement Program of the College Board. Currently based in Mexico, he heads the Department of letters and Humanities at Guadalajara’s American School.

What initially impressed me was the depth of Hogan’s research. Though this is not an overly long work (less than 250 pages), the author has not only consulted every book written on the subject but also manuscripts, papers, documents, monographs, newspapers and both primary and secondary accounts by participants and contemporaries. Much of the research material is in Spanish, which constitutes no problem for the bilingual author.

Hogan never permits his own Irish-Catholic heritage to stand in the way of scrupulous objectivity. He understands how the Irish soldiers—so discriminated against in the Army that they were not even allowed to have Catholic chaplains—would go over to an “enemy” with whom they shared a common faith. At the same time, he also sees how a trend from regionalism to federalism would be the perfect tinder for a doctrine as arrogantly chauvinistic as Manifest Destiny, the belief in continuing territorial expansion, especially at the expense of people whose skins were darker and whose religious views differed from Anglo-Protestantism.

As people stopped thinking of themselves as Virginians or New Yorkers and begin acquiring an identity as Americans, what better way to demonstrate their nascent Americanism than to extend it as far and as forcibly as they could.

As for the anti-Catholicism, that was pretty much an accident of chronology. In colonial times, the Puritans persecuted Quakers like William Penn and Dissenters like Roger Williams. In the 1840s, when the Mexican War took place, there was a massive wave of Catholic immigration and Protestants banded together to persecute Catholics. Later, Catholics would unite with Protestants to bash Jews.

In the future—who knows? Judeo-Christians may well form a united front against Muslims or Buddhists. We hear much talk these days about what I would call the “Vichy Syndrome,” describing people who serve an oppressor as auxiliaries against their own kind. Edward Said refers to Arafat’s Palestinian Authority as the “Vichy Palestinians”; leaders of a Kanaka separatist movement call native Hawaiians who serve in the state legislature “Vichy Hawaiians.” One of Hogan’s most fascinating profiles of a “Vichyite” in the Mexican War has nothing to do with the Irish soldiers who went over to the Mexican side.

Instead, it focuses on the repellent figure of Lt. Col. (later General) William S. Harney, an Irish-Catholic officer in the U.S. Army who became notorious for his sadistic treatment of captured San Patricios. As a Catholic in an anti-Catholic army, Harney felt he had to be more royalist than the King and, so to speak, more Catholic than the Pope in demonstrating his loyalty. Brutal, incompetent and lustful, Harney had been frequently charged with disobeying orders and of sexually abusing Indian women during the Black Hawk War and then hanging them the next day. As a group of San Patricios was waiting to be executed, Harney knocked out the teeth of one man who had taunted him. Yet he was politically well-connected and ended his career a general.

But those inclined toward condemning the San Patricios should bear in mind that the Mexican War was, with the possible exception of the Vietnam conflict, the most unpopular in U.S. history. Hogan’s list of prominent contemporary peaceniks reads like a gallery of distinguished Americans. Thoreau went to jail rather than pay taxes to support the war, Lincoln denounced it in Congress.

John Greenleaf Whittier and James Russell Lowell wrote poems against it, and Ulysses S. Grant, who served in Mexico, describes the conflict as “the most unjust war ever waged by a stronger against a weaker nation.”

Whether your inclination is historical or cultural, this is one book on Mexico you won’t want to miss.

(Ed. Note: Because this exceptional book is now on Kindle, we decided to republish our review which originally came out several years ago. The Kindle and Createspace versions contain new information both on John Riley’s death and updates on research, related novels, films and commemorations. )