The Biggest Little Man in Mexico
(Republished by Request) 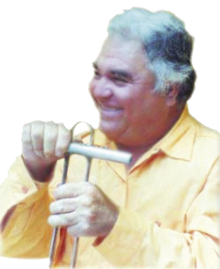 The first time I met Norberto Mejia, he reminded me of the noble water-bearer in Rudyard’s Kipling’s immortal poem, Gunga Din. Hurried (and often faulty) typecasting of just about everyone I meet is one of my many mental aberrations; a carryover, I suppose, of the many years I spent in the motion picture industry. Yet as I came to know Norberto better, my initial notion deepened into absolute conviction. Today, there is no man whom I am prouder to call my friend.

Ironically, our friendship was first forged when I tried to take advantage of him. Prior to that, I had seen him dozens of times, but never given him more than a few seconds of my (alleged) valuable time. Seriously handicapped people usually make me uneasy, stemming (I suppose) from my angry befuddlement over how incredibly unfair fate can sometimes be.

On this particular afternoon, I was already pretty upset, having grown desperate in trying to find a bed and breakfast place for the last three puppies one of my dogs had so thoughtfully presented me with the previous Christmas; and by now, having run out of gullible gringo prospects, I was reduced to trolling through the native population. But still no luck.

Then I spotted Norberto, sitting on his little skateboard-like platform outside a local market in Ajijic. I swiftly stammered out my offer: twenty dollars if he would take the three puppies off my weary hands. The money would buy enough dog food until he could find them a good home. I knew, of course, that this was a semi-rotten deal—for if he was unable to place the pups, their life-long maintenance cost would run far beyond my measly offer of compensation. I would try, however, to help him on a regular basis.

To my surprise, Norberto readily agreed to these undernourished terms—on one condition: I would have to give him a lift to his home in Jocotepec, as he could not take the dogs (albeit safely boxed) with him on the bus. I quickly agreed to this, a small price to pay for the successful unloading of my unwanted cargo of canines.

I was not especially delighted, however, having assumed that the short jaunt to Jocotepec would involve bitter reflections on life in general, and his own in particular. Norberto was obviously nearly destitute, and had a severe physical disability.   Yet not once over the course of our trip did he voice anything but the sunniest of statements about everything and everybody, including himself. He even poked gentle fun at his own deformity. Listening to him, I thought, this guy doesn’t have much in the way of legs, but he sure has more than his share of moxie.

The next pleasant surprise came when we reached his house. (I use the term “house” loosely, for it was scarcely more than a covered enclosure that sat squeezed between two other dwellings, themselves little more than brick hovels.) I had just gotten him down from my car and onto his tiny makeshift skateboard when it seemed half the neighborhood suddenly materialized.

Kids came running toward us with those infectious smiles Mexican children seem to be born with, and in moments many adults joined their ranks. Everyone appeared greatly relieved that the crippled beggar had made it safely home. A hero returning home from a war could not have received a more heartfelt welcome. Struck by this emotional tableau, I quietly vowed to get to know Norberto Mejia.

In the months that followed, I learned much about him, yet no more than things the people in his neighborhood apparently had known for years. You see, it’s like this . . .

My little friend is neither priest nor pastor—yet I doubt anyone who knows him has not experienced at least a slight twinge of spiritual awakening.

He is not a psychiatrist—yet rarely have I understood myself better than after spending a half hour in his company.

He is not a financial counselor—but the insignificant amounts of money I have given him have yielded an incredible return.

He will never be a star of stage or screen—yet seldom have I encountered a more charismatic personality, or eyes that so artfully reflect the humanity inherent in every heart.

He is no more than a few feet tall—yet never have I seen any man’s children look at their father with more pride and affection.

He has never won a medal for bravery—yet to watch him attempt something so simple as getting on and off a car is to witness courage in its most sublime form.

Finally, he is not a man with whom any of us would be eager to trade places— yet I have never met anyone who plays with more grace the lousy cards he was dealt.

So the next time you see him at Plaza Bugambillias, do yourself a favor and make his acquaintance. His warm smile and cheery manner will prove worth far more than whatever you care to press into his palm or drop into his styrofoam cup . An added bonus might come when you walk away thinking, as I invariably do, that life is a great gift that should not be squandered.

I’ll close by paraphrasing the last line of Kipling’s unforgettable poem: You’re a better man than I, Norberto Mejia.