Ken Masson has been playing, teaching and writing about bridge for 35 years. Originally from Dublin, Ireland, Ken has been living in Toronto since 1967. He and his wife and bridge partner, Rosemarie, are now in their third year wintering at Lakeside.

Herself and myself have played thousands of hands since we first got together more than three and a half decades ago. As any married bridge couple will attest, this marathon run has resulted in many a heavy discussion after the hands have been played.

The illustrated deal was played at the Lake Chapala Duplicate Bridge Club. As North, I opened the bidding 1 heart and partner responded 1 spade. I now showed my second suit with a bid of 2 diamonds and was somewhat startled to hear her second bid—5 clubs! In all those many years playing together I cannot remember a bidding sequence quite like this one. Since we play a 2/1 game-forcing style, and also play fourth suit forcing to game, I could only assume that South held a highly unusual hand with fewer than the required points to bid to game in a normal fashion.

But just what was her distribution? 4 spades and much longer clubs? And what losers did she hold? Would my Ace and King of hearts provide her with tricks? So many questions, so little time to come up with an answer! I must confess that I fell in love with my club holding and after due consideration bid the small slam.

Our opponents were Marilyn and Peter Miller. Marilyn led a high spade to take a look at dummy. With only one trick available for East-West there, Peter played his lowest spade to suggest a switch to the lower ranking side suit, diamonds. Marilyn duly led a small diamond to put the slam down in double quick time.

Later, in the privacy of our own home, over a glass of Merlot, herself and myself discussed the hand in our normal, adult, rational way. I pointed out that had South held one small heart and a void in diamonds, I would have been a hero for bidding the slam and we wouldn’t be having this conversation. She tried to set me straight by quoting one of my favorite phrases: “Don’t play me for the perfect hand because I won’t hold it!”

And there I had to admit defeat. We would have received a very good score for 5 clubs making but got next to nothing for minus 100. I’m sure I won’t make the same mistake again if the same hand comes up sometime in the next 35 years. 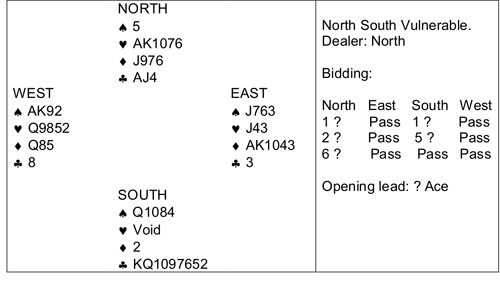