Mañana is good enough for me

Shortly after arriving in Mexico, we learned the “true” meaning of mañana. Oh, sure, we knew it meant “tomorrow” and we soon learned it meant “morning”… but later we discovered that Mañana is actually the eighth or ninth day of the week. Depending on your culture.

We believed the plumber when he said he would be back Mañana. When he didn’t show up the next day, we’d call and he said “Mañana” So we’d assume he meant the next day—until we began to suspect that Mañana was actually a day of the week we didn’t know about. Unsure of where Mañana fits on the calendar, we found that Lunes was Monday, and Martes was Tuesday. Could Mañana be Wednesday? Nope, that’s Miercoles…followed by Jueves for Thursday and Viernes for Friday. Maybe Mañana was part of the week-end?

Wrong again. Sabado and Domingo round off the week for Saturday and Sunday. “It must be there!” So we learned that in Mexico the week isn’t seven days, it is eight days. Sunday counts as both the first day and the eighth day. So we decided Mañana must be a “floating” day of the week, with its definition assigned by the user. Which means it’s any day of the week…but almost never does it actually mean tomorrow. It really means, “as soon as I can work it in.” We also learned that “cinco minutos” didn’t necessarily mean “five minutes.” More accurately, it was “any time within the next hour.”

Many ex-pats talk about the cultural differences relating to time. I cannot speak for Canada, but living in the United States is an exercise in punctuality. We rushed to get to work on time, to make our appointment on time, to make the meeting on time. The hands on the clock orchestrated our days. We had gadgets for time management, time “saving” devices galore, but did we really have any more time? In Minnesota there was a saying: “The hurrier I go the behinder I get.”

Fast food, fast service, hurry, hurry, rush, rush. And while we were running around meeting all our schedules, it seems like we lost track of, well, time. There never seemed to be enough time to do the things we really wanted to do.

We were slaves to the clock. We were not really living our lives. In Mexico, people are busy living their lives. Mexican people live “in the now.” They enjoy their lives. How many times did we rush past people on our way to a meeting? Here, they greet one another, smile, hug and kiss. Or if they need to be somewhere, they keep it short and say “Adios.” In addition to “farewell” or “goodbye” it also means “Go with God.” A few things Mexicans do fast: speak and drive. But these are the only things requiring speed that I’ve witnessed.

So what happens when the rattled and rushed meet the measured and unhurried? That’s what we call “culture shock.” We joke about “Mexican time,” we slap ourselves on our foreheads when we arrive at their shops in the middle of the afternoon and find them closed for comida. We look puzzled when they explain their concept of time. And I’m sure they puzzle over the way we deal with time and how we seem to want everything done right now. When I stand back and think about it…I like their way of doing things a little bit better; in fact, in honor of this culture, I stopped wearing my watch, adopted my own definition of Mañana, and Mañana is good enough for me. 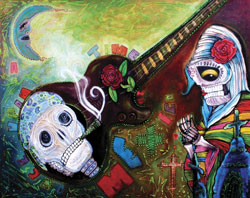