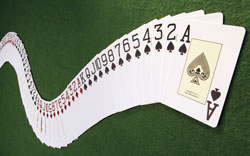 One of the fascinating things about duplicate bridge is the opportunity it provides to discover new things all the time and hopefully benefit from them when the situations warrant.  Largely due to the relatively recent impact of computers and the Internet it is now easy to access and study hands we have played and see how we could have improved our results by different lines of play.  It is a never-ending absorbing process, which for the true bridge aficionado can be an added enjoyment rather than a chore.

East certainly should have learned a valuable lesson when he played the diagrammed deal at the Lake Chapala Duplicate Bridge Club in Riberas. After East opened the bidding 1 club, South entered the fray with a sound 1 spade overcall. Note that although South had 13 high card points and shortness in the opening bid suit, the hand is not suitable for a take-out double because of the relative lengths of the two major suits.

Holding five HCP and five of his partner’s suit, West had a clear-cut raise to 2 clubs in a competitive auction. Similarly North was well worth his bid of 2 spades.  East tried one more time to win the auction but South with the boss suit had the final say and played in 3 spades.

West dutifully led the fourth best card in his partner’s suit and the trick was won by East’s club queen.  Without taking time out to plan his defence, East quickly continued with the club ace which was ruffed by declarer.  South now played two high spades picking up his opponents’ trumps followed by four rounds of diamonds to pitch a heart from dummy. Declarer now conceded 2 heart tricks before ruffing a heart and claiming 10 tricks meaning his contract had made with an over trick.

So where did the defence falter?  When East won the opening lead he should have realized that West likely held five clubs and that another club was unlikely to cash.  Looking at dummy, the most likely source of defensive tricks lay in the heart suit.  If West happened to hold the heart king, perhaps some tricks could be garnered in that suit.  But it was necessary for East to lead a specific heart for maximum reward and that card is the jack!  This is known as a surround (or surrounding) play and as the cards lay the only way for the defence to win three heart tricks.  Try leading any other heart card from the East hand and you will see that eventually declarer would have to come to one trick in the suit.

The learning wasn’t over yet for East.  Had he found the heart jack lead at trick two he would inevitably have won the third trick in that suit for his side no matter how declarer chose to play his hearts.

Now East could have administered his coup de grace.  Because of his partner’s holding in the trump suit, had he played the 13th heart it would have promoted West’s queen of spades into the 5th defensive trick thereby defeating the contract by one trick. A good bridge lesson indeed!

ART HESS—Anyone Can Train Their Dog

Raised and educated in Alberta and pursued a mixed career of business, livestock and real estate. Had a life-long passion for working with dogs and horses. Next came 12 years near Victoria on Vancouver Island where we had several more business’ and then the “Dear, let’s sell everything and move to Mexico phase.”
“Aging is easy. Follow your passion and remember that Attitude is Everything. Strive to live a balanced life in harmony with your environment. Practice compassion, walk a mile in the other person’s moccasins or sandals before passing judgement and remember that trust and respect are earned not mandated.”