By R. J. Mcmillen
Review By Antonio Ramblés
Published by Touchwood Editions
Available on Amazon in paperback for US$11.83, and Kindle for US$7.69 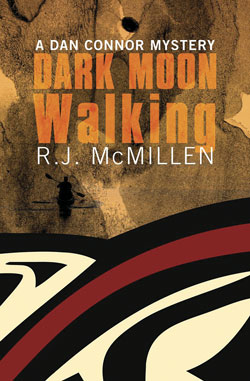 In Dark Moon Rising, local author R. J. McMillen has proven herself to be a consummate story-teller. She’s forged an inventive premise, a continuously-unfolding riddle that keeps the reader craving the turn of the next page from beginning to end. Her choice of the Emerald Islands, waterways, and wildlife of British Columbia’s Pacific coast as the book’s setting makes for a rich and rare backdrop.

Part of McMillen’s genius is her ability to write in a way that resonates for both the novice and the aficionado.  You don’t have to be a mystery buff to appreciate this tale, but fans of the whodunit genre will find it more than satisfying.  You don’t have to be a seaman to appreciate it, either, but sailors and fishermen will read in McMillen’s descriptions of life on the water the unmistakable ring of authenticity.  This is a book that will make new fans for the mystery genre, and seduce city slickers and landlubbers alike with its call of the wild.

McMillen’s writing style is crisp, straightforward, and eminently readable, but the author waxes beautifully poetic when writing about clearly beloved islands, waterways and boats.  No surprise, since McMillen divides her time between her homes at Lakeside and in British Columbia.

This book is full of unique and memorable characters crisply drawn, and McMillen works hard to avoid mystery genre stereotypes. She seamlessly weaves setting and dialogue together to paint all of her characters as colorful mosaics, and even the supporting characters have great depth, dimension and originality.  There are no drive-by characters in this book, and few are what they first seem.

Dan Connor, retired early from me anti-terrorist beat, is guilt and grief-stricken after his wife is brutally murdered in what is hinted at as a consequence of his work.  He’s taken to his boat to salve his grief and sort out his life, and now lives on the water.

Walker is a Native American crippled years earlier by a fall in a Vancouver robbery gone bad that ended with his arrest by Conner.  Upon Walker’s release from prison, he returns to his ancestral home and lifestyle among the islands, where he reconnects by happenstance with Connor.

Beneath the engaging veneer of it’s mystery, this book explores some weightier issues. Dan, retired from the work that has long defined him, wrestles with the conflict between being at the center of the action as no more than a civilian bystander struggling to orchestrate the actions of others.  When events return him to informal police work, he finds in it an unlikely therapy for the grief and guilt arising from his wife’s murder.  Walker’s age-old, low-tech resolutions for otherwise unsolvable dilemmas call into question not only the limits of technology, but the values which drive our techno-focused society.

Dark Moon Rising honors the tradition of the great mystery novelists of the ‘40’s and ‘50’s.  In McMillen’s world there are no psychic profilers, CSI forensics, or electronic surveillance, and yet in its old fashioned reliance on little more than intuition and powers of deduction it is literally as contemporary as the war on terrorism.

This book will keep you guessing at the ending right up to the final chapter, and then leave you panting for a sequel. It’s a book in which everything clicks, and one well worth adding to your summer reading list.